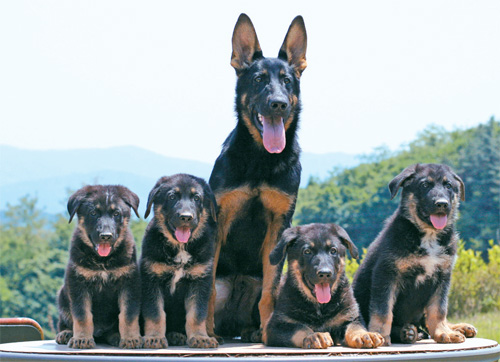 Five puppies cloned from Trakr, a German shepherd, who made headlines by rescuing victims from the World Trade Center following the 9/11 terrorist attacks, mug for cameras. Suam Biotechnology Institute announced yesterday that the team led by Hwang Woo-suk has successfully cloned the dog. [YONHAP]

South Korean scientists led by a formerly disgraced researcher yesterday said they have successfully cloned a dog that made headlines by rescuing victims from the World Trade Center following the 9/11 terrorist attacks.

Suam Biotechnology Institute said the team led by Hwang Woo-suk cloned Trakr, who died in April at the age of 16. The dog became a hero after pulling the last remaining survivor out of the rubble of ground zero in New York.

In 2005, Hwang, a former veterinary professor at Seoul National University, was the first scientist ever to clone a dog. He is a controversial figure, however, having been disgraced by reports that he falsified data related to the creation of the world’s first embryonic stem cells, for which he is currently on trial.

The laboratory said that the cloning took place in cooperation with California-based BioArts International that provided the dog’s DNA samples. Suam said that it cloned the rescue dog free of charge with all five puppies being given to James Symington, a retired Canadian police officer and the original owner of Trakr.

The laboratory in Yongin, Gyeonggi, said that original DNA from the German shepherd was inserted into a “surrogate” cell that was then injected into female dogs. It stressed that the five puppies were exact copies of Trakr, with their DNA being checked by an independent laboratory.

“The puppies are expected to become rescue dogs and could open new horizons for cloning specialized canines that have done well in police and rescue operations,” a Suam spokesperson said. Yonhap