Why do we keep hearing about irregular workers?

Why do we keep hearing about irregular workers? 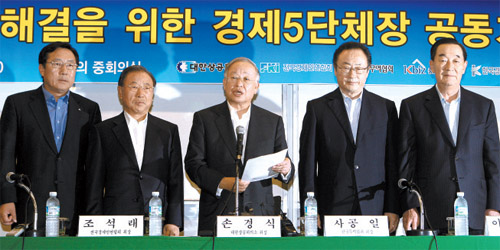 The heads of the nation’s five leading business lobbies, including Sohn Kyung-shik, center, chairman of the Korea Chamber of Commerce and Industry, met on July 2 to urge the ruling and opposition parties to quickly revise the law related to irregular workers. Provided by the chamber


Protecting workers typically ranks near the top of the priority list for almost every country.

Having a happy, productive workforce benefits everyone, from the taxi driver circling Itaewon to the teenager working at McDonald’s to the well-dressed chief executive officer. A healthy labor market helps reduce poverty, fuels economic growth and prosperity, increases a country’s competitiveness in the global market and leads to even more jobs, creating an environment where people and companies can thrive.

In Korea, a country that has gone through rapid expansion in a short period of time, the government has been striving to create an efficient labor market system to ensure long-lasting growth. A big part of its efforts revolve around job security, particularly for irregular workers ? a group that includes contract, part-time and outsourced employees who have little job protection and almost no benefits such as health insurance and pension.

But a plan to help out these workers has generated a fair share of controversy lately. And some of them are actually losing their jobs as a result.

It’s an important issue, particularly if you or someone you know falls into the category of irregular worker, which covers everything from factory workers to gas station attendants to secretaries. Without a job, after all, it’s hard to afford those weekly shopping trips to Myeongdong, let alone put food on the table.

But to fully understand the issue and its implications, we must first look back.

In November 2006, the government took up the issue of irregular workers, hoping to craft a plan that would help protect them from being laid off at the whim of their employers.

Officials initially wanted to require employers to convert irregular workers into regular employees immediately, giving them all the benefits and security that come along with such a move, or let them go.

But employers lobbied for an extended period of time to switch the workers’ status, and the government agreed.

On July 1, 2007 it enacted a law that requires employers to convert irregular workers to regular employees after those laborers have been with the company or organization for two years.

If a particular employer does not want to convert the worker, it has to let them go.

So here we are in July 2009 ? two years after the law was enacted ? and the first wave of irregular workers are ready to get upgraded to regular status.

The only problem: Employers are struggling in an economic downturn, and they’re not exactly in the best position to shell out more money to pay for additional benefits and other labor expenses. In fact, many of them have cut staff in recent years.

So numerous companies and agencies have chosen to lay off their irregular workers rather than convert them, putting more people out of work. These employers say they would keep the workers on staff if it weren’t for that darned new law. But, not having that option, they are forced to let them go.

The government’s plan has had some real unintended consequences.

The concern now is that the law will lead to mass layoffs, which could plunge the nation into even greater economic turmoil. Definitely not good.

Based on data from the National Statistical Office, an estimated 700,000 to 1 million irregular workers will reach their two-year period in coming months. That’s a whole lot of people who will either be converted to regular workers or be fired in a short amount of time. And with the economy still struggling, you can bet that many companies will choose to unload the workers rather than keep them on staff.

That is, unless the current law is revised or tweaked. And the government is trying to do just that, albeit unsuccessfully so far. The National Assembly hasn’t hammered out any specific measures yet, which employers say is the reason they are having trouble devising plans to deal with irregular workers.

Most officials say something has to be done, they just can’t agree on what to do.

The ruling Grand National Party recently proposed that the conversion period be extended to four years for each worker.

But the Democratic Party refused, saying that the benefits of such an extension would be minimal and that it would in fact create more confusion and conflict down the road.

Instead, the party proposed that the government build up a budget to provide subsidies to small and midsize companies that are changing the status of their irregular employees. That, the DP says, would encourage more companies to convert the workers and blunt the costs associated with doing so.

Alas, the governing party disagrees, saying it’s not enough of an incentive and will put a huge burden on government finances.

So now we should probably look at what’s actually happened since the law went into effect.

The exact number of irregular employees who have been laid off since the start of July is unclear. Still, numerous news reports indicate that many companies ? including public corporations and small enterprises ? have started sending official notices of dismissal to irregular workers.

Ruling party lawmaker Kim Sung-tae recently said that 240 of the 1,361 irregular workers employed at 28 governmental agencies under the Ministry of Land, Transport and Maritime Affairs were laid off during the first two days of July. Another 1,042 are expected to be fired by the end of this year, Kim said. That might give you an indication of how this will play out across the country. We could be talking about tens of thousands of jobs cuts.

But there is some hope on the horizon.

The government is asking the business community to refrain from firing irregular workers until political parties at the National Assembly agree upon revisions. In a plea to local businesses, President Lee Myung-bak recently said that the nation “should pay more attention to people suffering the most,” adding that part of a company’s mission is “social responsibility.”

That’s all well and good, but what exactly do companies think?

They’re not exactly pleased, of course. Business groups say they will help out irregular workers as much as possible, but they are lobbying to get the bill changed quickly. And they want a say in any final decision.

“When the law was first established, the business community repeatedly warned about the possibility of mass layoffs, but our concerns were completely ignored,” said Sohn Kyung-shik, chairman of the Korea Chamber of Commerce and Industry. “Only politicians and labor unions, not the business community, were involved in the negotiations, which has made the problem more difficult to solve. The negotiations are meaningless if employers are excluded, and that practice should stop immediately.”

In the meantime, the government said it will strengthen the employment program for laid off irregular workers by setting up additional counseling booths at employment centers, providing employment compensation, doling out living cost loans and creating more job opportunities.