Korea’s first car drove off to a new beginning

Korea’s first car drove off to a new beginning 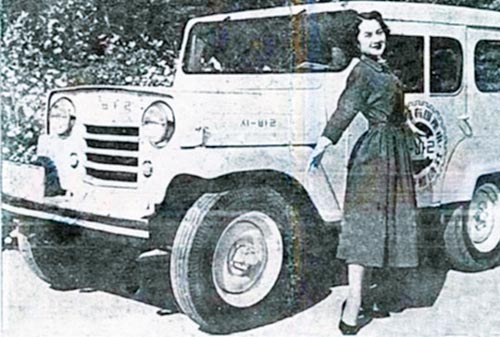 The first vehicle manufactured in Korea was the Sibal, which had a life as a taxi and a vehicle popular among the Korean elite. [JoongAng Ilbo]

Korea is one of the leading automobile manufacturers in the world today, ranking fifth in production volume.

This is quite impressive considering its short automotive history.

Although the first automobile in Korea was a Cadillac driven in the Joseon Dynasty (1392-1910), Korea didn’t start to manufacture its own vehicles until the 1950s.

The first vehicle built with Korean technology was the Sibal, a jeep developed by Choi Mu-seong, an auto mechanic, and his younger brothers Hye-seong and Soon-seong. Sibal means “beginning.”

The Sibal, which debuted in August 1955, was modeled after a U.S. army jeep but the engine was Korean made. It was a two-door vehicle with an engine capacity of 1,323 cc. It had three speeds and could go as fast as 80 kilometers (49 miles) per hour.

Koreans took great pride in the Sibal, even if 50 percent of its component parts were imported.

The production of a single Sibal took four months. Engineers actually had to pound the steel manually and there was no production line.

There wasn’t much interest in the vehicle when it first came out. But that changed two months later when it received a presidential award at an industrial exhibition held in front of Gyeongbok Palace in downtown Seoul.

Shortly thereafter, demand for the vehicle spiked and the price quadrupled. With more money coming in, the brothers were able to build a factory with a production line. The company, which had started with headquarters at Euljiro, later relocated to Jongno and soon established five factories, including two in Yongsan.

The vehicle was particularly popular as a taxi and its boxy shape could be seen traversing the streets of Seoul.

Because of the high demand for the vehicle, manufacturers began to have trouble filling order requests and speculation started pushing up the price tag. And as the price rose, the Sibal got a new identity: as a vehicle for the country’s elite.

But the car didn’t last long. The manufacturer spent too much money on development of new vehicles including buses, trucks and tractors, and government subsidies came to an end.

The company suffered a major loss with the introduction of new vehicles from competing companies, especially those that partnered with Japanese automakers such as Nissan.

Sibal shut down production altogether in May 1963. When the plant closed, a total of 3,000 Sibals had been manufactured.

Although the Sibal no longer exits, its legacy lives on in the Korean car companies of today.

Choi Mu-seong immigrated to the U.S. in 1962 and ended his legacy as Korea’s first automobile manufacturer.

BLAST FROM THE PAST