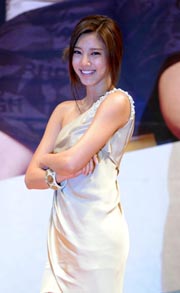 Son Dam-bi’s acting career has begun. Cast in the upcoming SBS-TV drama “Dream,” the 26-year-old singer will play Park So-yeon, one of the three main characters.

In a press conference held last Tuesday in Busan, Son remarked that she related to her role.

“Park is a lot like me, which is a major reason why I chose this project” she said. The singer also added that “acting has always been my dream.”