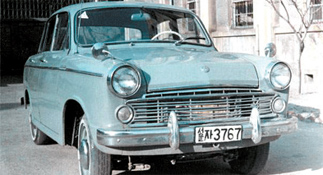 Saenara’s sedan didn’t even make it to its first birthday after business failed after less than a year. [JoongAng Ilbo]

Saenara was a short-lived automobile manufacturer that didn’t even survive to see its first birthday.

But the company left its mark on the industry none-the-less, churning out the first locally manufactured sedan since the Korean War.

Saenara used a modern assembly line to make its eponymous cars. This made it different from the Sibal, which was the first vehicle manufactured in Korea and was essentially put together by hand.

Saenara, which means “new country,” was founded in August 1962 by Korean-Japanese businessman Park No-jeong. It assembled ? but didn’t design ? its own vehicle, as the Saenara was actually a Nissan Bluebird P310. The company bought the license to assemble the four-door sedan at a local plant. The 55-horsepower car had an engine capacity of 1,189cc.

The vehicle was manufactured at a plant in Bupyeong, where GM Daewoo’s plant operates today, starting in November 1962.

When it was first built, the plant could produce 6,000 vehicles a year. However, the factory closed before reaching even half of that production capacity.

The government at first permitted the import of 400 Nissan’s Bluebird P310s, which were sold to cab companies as Saenara Taxi. The car’s arrival on the scene diminished Sibal’s taxi business.

In fact, Saenara’s entrance into the market was the death knell for Sibal, which eventually became bankrupt.

Saenara vehicles, however, didn’t do too well either, failing to attract a strong consumer base in large part because of their expensive 250,000 won ($200.75) price tag.

When establishing the company, the government raised the retail price to nearly double the manufacturing cost, funneling the money into its coffers. Swept up in a political dispute and beleaguered by weak demand, Saenara closed shop in May 1963.

After less than a year in business, Saenara disappeared into the history books. Just 2,700 units were built.
By Lee Ho-jeong

3. From bikes to trucks: Kia’s rise in the local automobile industry
http://joongangdaily.joins.com/article/view.asp?aid=2908536

BLAST FROM THE PAST