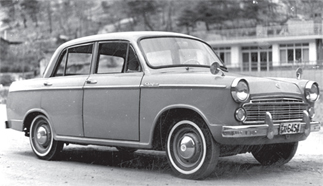 Sinjin’s Sinsungho had a body from Korea and parts from used U.S. military vehicles.

The new star of the Korean automobile industry in the early 1960s was a hybrid of sorts. It had a body from Korea and parts patched together from used U.S. military vehicles. Although this didn’t prove to be winning combination, it did do a lot to advance the field of automobile design in this country.

In the 1960s, Korea hadn’t reached the point where it could manufacture a vehicle solely with Korean parts.

The Sinsungho, which means “new star,” was one of the first cars to have a body designed and manufactured locally.

The car was developed by Sinjin Automobiles and made its debut in November 1963.

Sinjin Automobiles was established in 1957 by Kim Chang-won, a South Chungcheong native. During the Korean War, Kim fled to Busan, a city filled with auto technicians and military vehicle parts, and started his business by fixing and revamping automobiles.

In 1962, Kim expanded Sinjin and the company began manufacturing microbuses with used parts from large military trucks. It was a successful venture and the vehicles were used as public transportation throughout the 1960s.

After watching the launch of the Saenara sedan in 1962, which was actually a Nissan Bluebird P310 assembled in Korea, Kim decided to try his hand at auto manufacturing.

The Sinsungho’s engine and transmission were used parts from military jeeps, but the tires and windows were made in Korea.

Although most of its parts were used, the Sinsungho is considered a significant advance in automobile technology.

Even so, Sinsungho had several major flaws. It was twice as expansive as the Saenara. In addition, most of its parts were used parts from jeeps, which led it to break down frequently.

In July 1965 the Korean government announced a three-year automobile industry plan to increase the number of Korean-made auto parts in Korean-made vehicles to 90 percent by 1967.

As part of the plan, the government allowed Sinjin to acquire Saenara, which at that point had been out of business for almost two years.

Sinjin later formed a partnership with Toyota in 1966 and produced vehicles like Crown and Publica. In 1972, however, Toyota broke off its relationship with Sinjin because the Korean automaker had become reckless in its management, among other reasons.

In 1972, Sinjin was absorbed into GM Korea, a joint venture created with U.S. automaker GM.