Statue of King Sejong is unveiled

Statue of King Sejong is unveiled 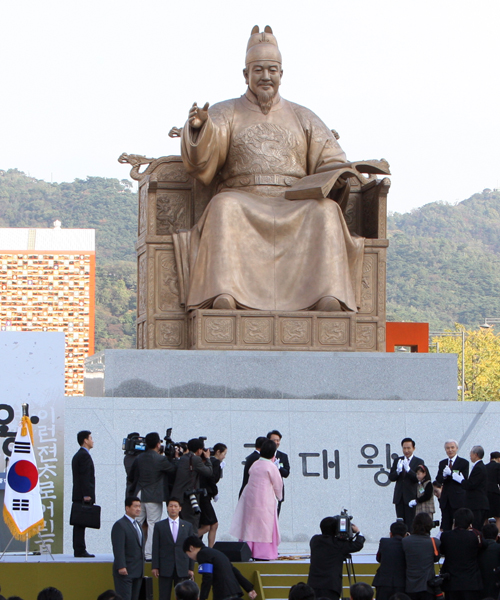 A new bronze statue of King Sejong the Great was dedicated yesterday in Gwanghwamun Plaza, central Seoul, in celebration of the 563rd anniversary of the creation of Hangul, the Korean alphabet. [YONHAP]

A new statue of King Sejong the Great (1397-1450), one of Korea’s most respected ancient rulers credited with overseeing the invention of the Korean alphabet Hangul, was dedicated yesterday in central Seoul in celebration of the 563rd anniversary of that event.

The 6.2-meter (20.3-foot) high, 20-ton statue was unveiled at Gwanghwamun Plaza, a landmark downtown park, during a Hangul Day ceremony attended by President Lee Myung-bak and other government officials.

Sejong, the fourth king of the Joseon Dynasty (1392-1910), is remembered for creating Hangul - one of the world’s only artificial scripts in public use - to broaden literacy across the general population and promote learning.

Hangul was named Joseon’s official alphabet by Sejong on Oct. 9, 1446. North Korea celebrates its own Hangul Day on Jan. 15, when the king is said to have completed it.

“It’s our pride to have such a great leader as King Sejong and Hangul, which is our treasure and world heritage,” said President Lee said in a congratulatory message.

“Hangul has contributed to the low illiteracy rate among Korean people, giving our people equal opportunity,” Lee said, noting that the king created the 28 letters because he understood the difficulties common people had in trying to express themselves using Chinese characters. In front of the statue is a small pond in which a water clock, sundial, rainfall gauge and celestial globe are set. Along the underground passage directly under the statue is an exhibition hall displaying the achievements of King Sejong.

In a sign of the globalization of Hangul, a minority tribe in Indonesia adopted the Korean alphabet as its official writing system in August, and a Korean language school is scheduled to open in Sri Lanka for the first time in the region. A crowd of ordinary citizens and foreigners stopped at the plaza to see the unveiling of the new statue.

“It’s meaningful to have the monument of King Sejong in the center of Seoul,” said Park Byung-sun, 75. “I was born in the period of Japanese colonization and didn’t have much time to study when I was young. But I have always respected him for giving us wonderful Hangul,” Park added, volunteering that his traditional costume and hat were from the Joseon Dynasty era. William Waycie, a tourist from the United States, said watching the event in honor of the Korean alphabet was a unique experience for him.

“When I first came to Korea in 1970 as a Peace Corps volunteer, many books and newspapers were written both in Korean and Chinese. But now I can see the Korean government is promoting using Hangul and many Koreans are proud of having their own writing system,” the 64-year-old said. “It’s about preserving their own culture, and I think that’s a good thing.”