[In depth interview] A would-be assassin builds a new life

[In depth interview] A would-be assassin builds a new life 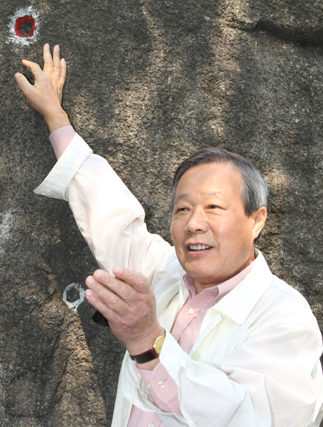 The hilly path on Mount Bukak that runs 1.9 kilometers (1.2 miles) from the eastern end of Jongno District to Seongbuk Stream in northern Seoul was closed off to the public. This was because it was the escape route for the North Korean commandos who 41 years ago failed in their attempt to assassinate South Korean President Park Chung Hee.

The passage, which has been transformed from a military patrol route into an open path to Mount Bukak, officially opened to the public on Oct. 24. It will be referred to as the “Mount Bukak Kim Shin-jo Route,” after the only commando who was captured alive there.

On Jan. 21, 1968, Kim and 30 other armed commandos invaded northern Seoul to assassinate Park in what came to be known as the Blue House Raid. They crossed the military demarcation line and reached the South Korean capital unobstructed.

They were initially spotted by South Korean civilians in Seoul, and the South tightened its security. Over the next 10 days, bloody skirmishes ensued in various parts of South Korea, as the commandos scattered in several small units trying to return to the North.

Ultimately, 28 infiltrators were killed, while two made it back to the North. Kim was caught alive. Estimates of South Korean fatalities have varied, but dozens of army soldiers, police officers and civilians were killed or injured. The raid forced South Korea to bolster its military and led to the creation of the reserve military forces in April 1968.

Kim revealed to South Korean interrogators that the commandos had “come for the head of Park Chung Hee.” Kim was later released, took a job at a South Korean construction firm, and even married a South Korean woman in 1970.

Kim himself didn’t escape using this particular passage. Three of the infiltrators were shot and killed there, but Kim was captured near Mount Inwang, west of Mount Bukak.

“If I had followed my fellows, I wouldn’t be here today,” said Kim, now 67 and a pastor at a Seoul church. “I am just sorry that a scenic place like this had been closed for so long.”

A week before the opening, Kim walked the path with the JoongAng Ilbo. He joked that he needed an hour to walk the trails that would have required only about 15 minutes 41 years ago.

On a more serious note, Kim recounted his past and offered his take on current inter-Korean relations.


Q. When you were captured in 1968, the so-called “Kim Shin-jo training” was the talk of the town.

A. Our training in the special forces was all about survival. We climbed a mountain higher than 1,000 meters alone and tried to survive. Of 100,000 agents who went through such training, 31 were handpicked to form the 124th Special Forces Unit. We were the cream of the crop, chosen to raid the Blue House.


Have you been in touch with your family members or fellow commandos in North Korea?

I heard that my parents were executed in public. I have no idea what happened to my siblings. A few years ago, the National Intelligence Service [in Seoul] showed me a photo and asked me if I recognized the face. It was one of our commandos from the Blue House Raid. He had four stars [on his military uniform] and had a potbelly. [Kim didn’t mention the general’s name. South Korean intelligence authorities suspect it was Pak Jae-gyong, a close aide to Kim Jong-il and vice minister of the People’s Armed Forces.]

In the past, I didn’t know why Kim Il Sung wanted to kill Park. But I came to know the reason as I spent time here. Kim must have been afraid of a poor country [such as South Korea] becoming rich. As the economy improved, [South Korea] would secure more money to buy weapons. For Kim, Park had to go if the North were to turn the South into a communist state. I was sent here to kill Park, but instead I developed respect for him as time went by.

But Park is still controversial among South Koreans.

His achievements in rapid economic development must be recognized. Today, the economy is sluggish and North Korea continues to try to provoke the South. South Korea is torn into pieces because of ideological conflicts and the gap between the rich and the poor. In times like this, we need charismatic leadership to restore order and lead us to the future. Division in South Korea would only help Kim Jong-il.


Tensions remain on the Korean Peninsula. South Korean lives were lost in a recent discharge of dam water by North Korea.

It’s the North Korean strategy to create a provocation first and then see what happens. And if the South remains willing to cooperate with the North even after suffering damage, then it would only play into North Korea’s hand. There must be [firm] principles to policy on North Korea, so that an incident like that isn’t repeated.

What do you think of the South Korean public’s awareness on national security issues?

There are many young people who don’t even know when the Korean War began. The name Kim Shin-jo is being forgotten, along with Kim Hyun-hee [a former North Korean spy responsible for bombing a South Korean passenger jet in 1987]. It’s unfortunate that people are putting themselves ahead of their country.

The intelligence officials here helped me get a job at a construction company, and I worked for a dozen years there. My wife is the biggest reason that I started going to church. It may have been 1981. She begged me come along with her and I did that on her birthday [on April 30]. I found it such a calming experience and I kept going after that.


What made you decide to become a pastor?

There was quite a bit of anti-communist education at school in the 1980s. One day, my kids came home and said my name was in their textbooks.

They didn’t like that at all. Back then, intelligence people and police guards were around us all the time. Whenever my children answered a call from a government agency, they were all upset.

I then changed my name to Kim Jae-hyun and moved my family to begin a new life. I wanted to serve the people, and so I quit my job and turned to faith.


Do you think intelligence officers are still following you?

I don’t think so. There were definitely some until the Kim Young-sam administration [from 1993 to 1998] but since the Kim Dae-jung government [from 1998 to 2003], I haven’t seen any major signs of watchdogs around us. And with that, I’ve finally felt that I’ve become a South Korean.