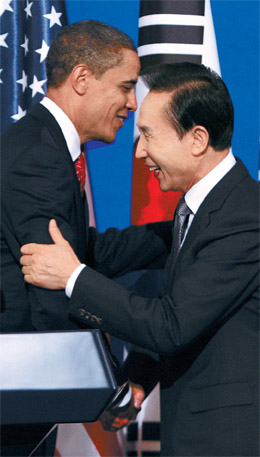 The United States will send a special envoy to North Korea on Dec. 8 for direct talks on the nuclear impasse with the dictatorial regime, U.S. President Barack Obama said yesterday, vowing that Seoul and Washington shared a commitment to break the past pattern of rewarding Pyongyang for provocative behavior.

Obama and President Lee Myung-bak also promised efforts to seek ratification of a bilateral free trade agreement that was signed in 2007. Lee said his government is willing to discuss the thorny issue of automobile exports if that helps the stalled ratification process move forward in the U.S. Congress.

Following a summit that lasted more than an hour, Lee and Obama addressed the press at the Blue House.

“We will be sending Ambassador [Stephen] Bosworth to North Korea on Dec. 8 to engage in direct talks with the North Koreans,” Obama told the media. It was the first time that the United States made public the date of the mission, aimed at persuading North Korea to return to the six-party talks.

“I am satisfied that South Korea and the United States are cooperating closer than ever in resolving the North Korea nuclear issue,” President Lee said, adding that he and Obama have agreed to resolve the situation through a comprehensive “grand bargain.”

“The thing I want to emphasize is that President Lee and I both agree that we want to break the pattern that has existed in the past, in which North Korea behaves in a provocative fashion, and then is willing to return to talks for a while and then leaves the talks and then that leads to seeking further concessions,” Obama said.

Lee said North Korea will face a new future if it takes the grand bargain offer, in which Pyongyang’s nuclear arms programs will be exchanged for massive economic aid and the normalization of ties with the international community. 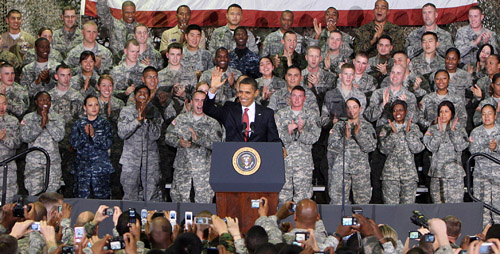 “I hope that by accepting our proposal, the North will secure its safety, improve the quality of life for its people, and open the path to a new future,” Lee said.

Obama also pressured the North to seriously consider giving up its nuclear weapons programs, emphasizing that the “door is open.” He also said the international community will not be distracted by side items that end up generating more meetings but little concrete action.

In addition to the nuclear impasse with North Korea, Lee and Obama also addressed the sensitive issue of trade liberalization between the two countries.

“President Obama and I reconfirmed the economic and strategic importance of the Korea-U.S. free trade agreement and agreed to work together to move the trade deal forward,” Lee said.

A senior Blue House official told the JoongAng Ilbo that Lee proposed a time line to Obama, urging him to persuade the U.S. Congress to endorse the deal before the end of the first half of next year. While the U.S. president’s reaction to the proposal was not immediately known, Obama made clear his commitment to forge ahead with the free trade agreement, saying that the deal will benefit both countries.

The free trade agreement was signed by the previous administrations in 2007. The last step to liberalize trade between Korea and the United States is ratification by their respective legislatures. U.S. automobile lobby groups have expressed dissatisfaction toward the deal, complaining that the Korean market was not open enough to them. In contrast, the agreement has been criticized by farmers and service industry workers in Korea.

Obama said a team has been created under his administration to remove the obstacles.

“American companies and workers are very confident in our ability to compete,” Obama said. “And we recognize that there is not only an economic, but a strategic interest in expanding our ties to South Korea.”

The American president also said the United States is concerned about the trade imbalance with Asia, although trade with Korea is relatively balanced.

“There has been a tendency I think to lump all of Asia together when Congress votes on trade agreements,” Obama said, adding that his government and the business community will try to assess conditions with each country separately to create a win-win situation.

President Lee also said he is aware of the automobile issue and his government is willing to talk about the concerns. “In Korea, those in the service and agricultural industries oppose the FTA, but we are pushing it forward because it will benefit bilateral trade,” Lee said. “If the automobiles are a problem, we are willing to talk about it. The European Union is a major automaker, but we signed an FTA with them.”

Senior Lee administration officials explained that the president’s remark does not mean renegotiation of the deal. “What he means is that we are willing to listen to what the U.S. concerns are for the automotive industry,” said Trade Minister Kim Jong-hoon. The trade minister added that Washington will discuss the matter internally first and then contact Seoul. “Convincing the Congress [to ratify the FTA] is Obama’s important task, and the U.S. president said the summit was helpful because he has earned some good points that he can refer to when persuading the legislature,” Kim said.

The U.S. president also said he has discussed global issues, including Seoul’s hosting of the G-20 summit and Korea’s participation in the global efforts to rebuild Afghanistan, with Lee. Climate change and clean energy were also discussed, Obama said, praising Korea’s recent voluntary announcement of greenhouse gas emission cuts by 2020. Lee and Obama talked for more than an hour at the summit with only a few key aides accompanying them, the Blue House said. Foreign Minister Yu Myung-hwan, Trade Minister Kim and Senior Secretary for Economic Affairs Yoon Jin-sik are among the Korean aides who attended. Obama was accompanied by Susan Rice, U.S. ambassador to the United Nations; Larry Summers, director of the National Economic Council; Deputy National Security Adviser Tom Donilon, Assistant Secretary of State Kurt Campbell and Jeff Bader, the senior director for Asian affairs at the National Security Council. The two leaders continued talks at a working-luncheon with more officials present. Obama said he was a fan of Korean culture and barbecue. The Blue House said the U.S. leader was given a taekwondo uniform and books featuring Korean art and culture. The U.S. president left yesterday afternoon.