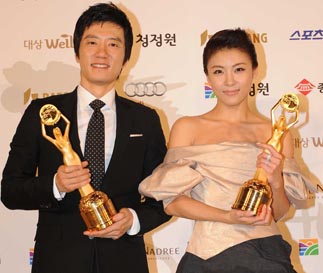 Kim Myung-min, left, and Ha Ji-won pose for a photo after winning Best Actor and Actress awards at the 30th Blue Dragon Film Awards at KBS Hall on Yeouido in Seoul on Wednesday. [NEWSIS]

The Blue Dragon Film Awards, which is celebrating its 30th event this year, is a major film awards ceremony in Korea along with the Daejong Film Awards held early last month.

Actor Kim Myung-min, who is well known for his rigorous self-discipline and his ability to adapt to different roles, actually shed 20 kilograms (44 pounds) to play a patient with Lou Gehrig’s disease (amyotrophic lateral sclerosis) in Closer to Heaven, for which he was awarded the Best Actor award. Kim’s dedication to his work was also recognized at this year’s Daejong Film Awards, and he earned top acting honors there as well.

“I thank God for giving me the talent for acting, but I’m more thankful for not having received more of it so that I can always strive to be better,” Kim said in a memorable speech after receiving the award.

The highlight of the event came when actress Ha Ji-won was named Best Actress. Although Ha has proven herself as a powerful actress on both the big and small screens over the past 14 years, she had not won any major awards for her work until her Blue Dragon award win. She did, however, win acting honors at an awards ceremony for the fifth University Film Festival of Korea, an emerging festival that was held on Tuesday, the night before the Blue Dragon Film Awards.

And even though her performances in this year’s box-office hits “Haeundae” and “Closer to Heaven” were well received by both critics and audiences, Ha also had the misfortune of being excluded from the Best Actress nominations at the Daejong Film Awards due to a voting controversy that riled Ha’s supporters.

“I wondered if this day would ever come,” Ha said in a tearful acceptance speech.

The Best Director prize went to Kim Yong-hwa for “Take Off,” a fictionalized account of Korea’s national ski jumping team.