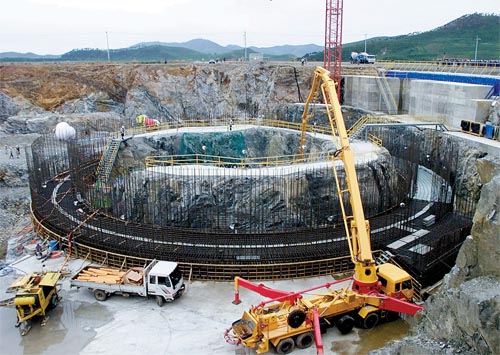 A stock photo of a construction site to build nuclear reactors in the North Korean village of Kumho. In late 2005, the Korean Peninsula Energy Development Organization, also known as KEDO, stopped construction of non-military nuclear reactors. The work had begun in August 1997 as part of the 1994 Agreed Framework between the U.S. and North Korea. [REUTERS]


North Korea has reused equipment and materials left from the halted construction work on light-water reactors, breaking a prior agreement with a multinational organization that oversaw the botched construction project.

According to the Unification Ministry and other sources, North Korea has taken 190 vehicles from the site in Kumho, South Hamgyong Province, and 93 pieces of heavy equipment, including cranes and excavators, and is likely using them for military purposes.

Sources said thousands of tons of steel bars and cement and communication devices are also being used by the North.

In late 2005, the Korean Peninsula Energy Development Organization, also known as KEDO, stopped construction of non-military nuclear reactors in the North. The work had begun in August 1997 as part of the 1994 Agreed Framework between the United States and North Korea. Under the terms of the agreement, Washington said it would build two reactors in the North in exchange for Pyongyang’s agreement to freeze all nuclear weapons activities.

But in October 2002, the United States said it had obtained intelligence that the North had been operating a clandestine program to produce highly enriched uranium to develop weapons and the U.S. State Department said North Korea admitted to doing so. By January 2003, the North withdrew from the Nuclear Non-proliferation Treaty. KEDO suspended its construction in November 2003.

Two years later, the KEDO’s board decided to terminate the construction project, which was about 30 percent complete. In December 2005, North Korea asked KEDO workers to leave the country and said they would not be allowed to repatriate equipment and construction materials.

At the time, KEDO and North Korea had agreed to leave materials at the site. Most belonged to South Korean subcontractors, and they had planned to sell off some of it to make up for financial losses stemming from the halted work.

In 2003, after the KEDO first suspended construction, the North said it would not allow the transfer of equipment unless it received compensation. A government official here said, “The North moved the equipment before we could even address the compensation issue, and that’s clearly in violation of our agreement. It can even be regarded as stealing.”

In January 2006, the Roh Moo-hyun administration in Seoul said the North had pledged to store the materials and that it expected the North to honor its word. Despite suspicions that the North had used some of the equipment in preparation for their second nuclear test this year, the current Lee Myung-bak administration has also remained silent.

They said the North started using equipment almost immediately after KEDO’s withdrawal and that the North Korean military was involved.

“North Korea is trying to keep South Koreans or KEDO officials from going near the construction base,” one source said. “Recent satellite photos of the site show that hundreds of the black covers that were used to conceal materials are mostly gone.”

Sources estimate equipment and materials are worth about 46 billion won ($39 million). South Korea, one of the founding members of the KEDO, spent $1.1 billion on the construction project.