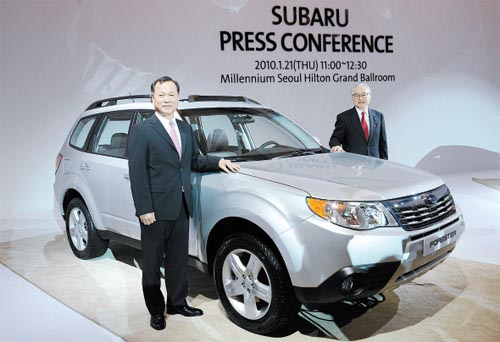 Subaru Korea said it would start out with the Legacy midsize sedan, the Outback crossover and the Forester sport-utility vehicle in late April.

The entry of Subaru will bring the number of Japanese automakers selling cars in Korea to five, including Toyota, Honda, Nissan and Mitsubishi.

All three of the models that go on sale in April are four-by-four vehicles, known as Subaru’s specialty. They will range in price from 30 million won ($26,362) to 40 million won, the company said.

“The price range will be similar to other Japanese rivals such as the Toyota Camry or Honda Accord,” said Shin Hyeon-sam, vice president of Subaru Korea. “Korea has a lot of mountains and snowfall, and four-by-four cars will be popular.”

Subaru Korea hopes to sell 600 cars this year and increase its sales to 200 to 300 per month beginning next year. Dealerships have already been selected in Seoul and Busan, with more to follow in Daegu, Gwangju and Seongnam, Gyeonggi, the importer said.

In the United States, Subaru’s sales increased 15 percent last year from a year ago to 216,652 despite the poor economy.

“Subaru cars are four-by-four vehicles, but their fuel efficiency is as good as front-wheel drive cars,” said Norio Fukui, who is in charge of Subaru’s operation in the Asian region.

Subaru was established in 1953 as a division of Fuji Heavy Industries Ltd., a successor of a company that made engines for World War II fighters. In 1958, Fuji launched the Subaru 360 minicar, contributing to the “my car boom” among Japanese wageworkers.