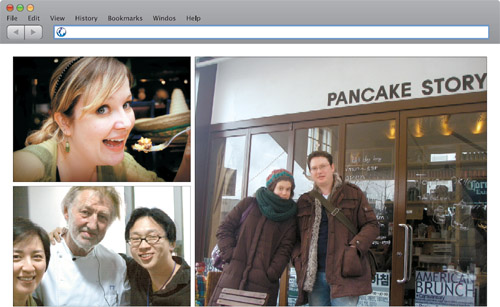 Everyone has their own ideas about what makes a great meal, and many often like to share their views online. That’s particularly true in Korea, where a thriving expatriate blogging community attempts to help foreigners navigate the county’s vast - and often confusing - restaurant scene.

Incorporating professional photography, innovative Web design and expansive reader forums, these bloggers have turned their passion for food into more than just a hobby.

The people behind these blogs are as diverse as the food they write about, as are the reasons they started commenting on restaurants around Korea.

The 35-year-old grew up watching Popeye’s Chicken training videos, as his father owned a store in the franchise. McPherson’s career took him in a different direction - he was a television producer and now works in Korea as a hagwon teacher. But his obsession with food remained.

McPherson originally started blogging as a way to avoid sending mass e-mails to his family in the United States. But he quickly noticed a trend developing in his posts.

“I was mostly writing about the food I was eating,” McPherson said. “I then discovered food blogs and found them very interesting, but there weren’t really any in Korea.”

McPherson started Zen Kimchi Korean Food Journal to fill that void. Over the years, it’s gained a solid following - so much so that McPherson recently brought on others to help him blog about restaurants and food in Korea.

“I’ve been wanting to try and do a group blog for a long time,” McPherson said. “There was never anyone really interested. But I just made a big push for people to join a couple of months ago and I got a great response this time. In fact, I’m having to turn people away right now.”

Other popular food bloggers in Korea stumbled into it in much the same way McPherson did.

“I started blogging in 2005, and at first it was a personal blog,” said Chalica Pack. “Never one for writing in diaries, I thought having a following of readers, however small in the beginning, would help me keep writing.”

Like McPherson, Pack soon realized that many of her posts dealt with vegetarian restaurants. So she launched Vegetarian in Korea (www.vegetarianinkorea.com) in July 2009.

For some food bloggers here, childhood experiences played a vital role in their desire to write about restaurants as adults.

Take Korean-American Daniel Gray, who writes for the blog Seoul Eats (www.seouleats.com). Adopted when he was very young by a couple in the United States, Gray returned to Korea in part to find a distinct flavor he remembered from his days in an orphanage here.

“I remember this bowl of seaweed-cucumber soup,” Gray said. “You can’t get this very sour and salty, taste-of-the-sea dish in America, so I spent my life trying to find that taste.”

With the increase in bloggers writing about food in Korea, writers say it’s become important to focus on a niche audience to set themselves apart from the crowd.

Her primary goal is to cater specifically to the vegetarian community, though she stresses that some of her blog entries focus on meat dishes as well.

“When I dine with meat eaters, I try and take pictures and get opinions of their dishes as well,” Pack said. “Not all vegetarians are friends with or dating other vegetarians. I want readers to know where they can get both meat and non-meat dishes.”

It’s not the easiest hobby in the world, however.

Some bloggers have difficulties balancing their passion with their day jobs. Others say you have to sit through a lot of bad meals to find the true gems.

McPherson uses a random approach to finding restaurants to review and says he “will eat at 10 bad restaurants” before he finds a good one to write about.

Gray of Seoul Eats said he uses his contacts in the chef community to fill him in on the latest restaurant openings.

“There are a lot of really good chefs and restaurants, and just people that are really passionate about food,” he said.

As these bloggers are pretty tapped into the restaurant scene, they have a unique view into what works and what doesn’t in Korea.

As for the next food craze, Gray offers up a prediction: Chicken and waffles.

“Koreans just love fried chicken, and they love waffles,” Gray said. “This will be the next big thing here - and you heard it from me first!”