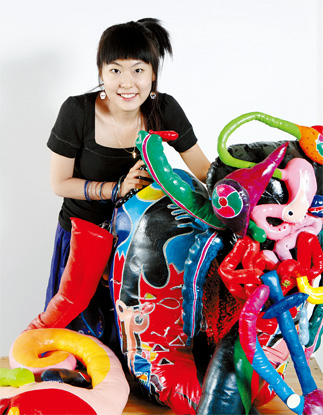 Up-and-coming artist Lee Fi poses with one of her works, “The Intestine Woman.” Provided by the artist

It may be unusual to come across something that stinks in a well-known art gallery.

But this piece literally does - it’s a bunch of well-dried squid.

Such a bizarre and somewhat sensational piece is nothing out of the ordinary at the “Monkey to the West” exhibit now on display at the Art Link gallery in Anguk-dong, downtown Seoul. 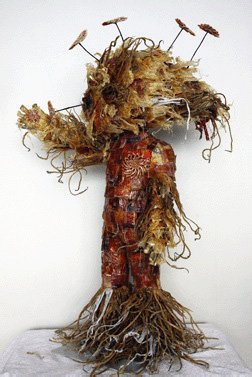 “Everything Ascending to Heaven Smells Rotten, No. 3” by artist Lee Fi is made out of dried squid. Provided by the gallery

“I saw people grilling squid on a portable gas range during a candlelight vigil at Gwanghwamun Plaza two years ago,” the 29-year-old said, explaining the subject of her work.

“The moment I saw it, I thought those squid resembled persistence, which I believe exists in the mind of Korean people.”

Lee added, “A squid also represents a little Asian girl who has lived as an alien in a foreign country. What I want to express with the image is that something which smells and looks dirty and odd can shine someday. Did you know that squid actually shine out in the deep sea?”

Lee, who often uses canvases and creates installations which are bigger than her own body, displayed her caliber at an early age.

She earned the nickname “a young-girl version of Picasso” with her first solo show, “A Journey Searching for Eyes, Nose and the Mouth,” in 1997 as a 15-year-old schoolgirl.

And her works were published in an art textbook for local middle school students in 2001.

The artist’s real name is Lee Fi Jae. When she studied at the School of the Art Institute of Chicago, she let her American colleagues, who found it difficult to pronounce her Korean name, call her “Fi Lee,” and it later became her official name.

It’s an interesting coincidence that the artist, who often uses images of blood in her aggressive works, took the name “Fi,” a word which sounds similar to the Korean word meaning “blood.”

While she studied in the United States, Lee was selected to appear in the television program “Art Star Season 2,” and was provided with a studio and expenses for her production.

The documentary show filmed Lee adapting to the art scene in New York City, and she succeeded in selling her works while shooting progressed.

“I want to hold protracted time, wound round and round a thread spool, in my arms and to bring together the time dedicated to my work without having to divide it up,” the artist said in a statement.

“I wish to load my own narrative onto each piece of work like a roaming peddler who moves from one village to another loaded with a variety of goods for everyday use.

“I wish to move grudgingly forward in this world while bearing the growing weight of the load of narratives.”