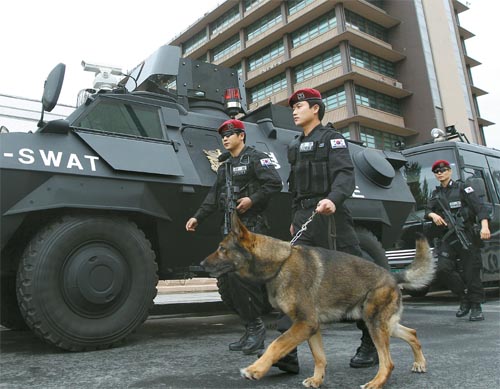 A SWAT team patrols the vicinity of the U.S. Embassy compound in central Seoul yesterday as the police beefed up security at major facilities across the nation after the military announced the results of the probe into the Cheonan sinking Thursday. [YONHAP]


The conclusion that a North Korean torpedo sunk the naval warship Cheonan in March provoked many emotions in South Korea - including chagrin that the Navy was caught off guard in the middle of its own waters, totally unprepared for a surprise attack.

Academics, retired military generals and even President Lee Myung-bak have said the military is on the wrong track in general, and has gotten to the point where it is almost ignoring the enemy under its own nose.

Two weeks ago, Lee called for a sweeping reconsideration of the existing military reform plans, dubbed Defense Reform 2020. It was formulated in 2005 and revised last year. The plan is aimed at emphasizing and bolstering South Korea’s advanced weapons systems and restructuring all branches of the forces. It also calls for a reduction in military manpower.

“We need to start with the Defense Reform 2020 and resolve everything so that it reflects the reality [of the security situation on the peninsula],” Lee said.

Kim Eun-hye, a Blue House spokeswoman, noted last week Defense Reform 2020 was conceptualized and written when inter-Korean relations were improved and there was a decrease in threats from North Korea.

After the Cheonan case, however, the context has changed, and so will the reforms.

The military is moving quickly to make changes, at least in the conference room. On Saturday, Defense Minister Kim Tae-young chaired an eight-hour meeting with key military figures, including Lee Sang-eui, the chairman of the Joint Chiefs of Staff, and chiefs of staff for the Army, Air Force and Navy.

According to sources, the new plans would call for an all-out strike on Northern military bases in case the North launches its coastal artillery or ground-to-ship missiles. The military leaders also discussed how to keep in check North Korean light infantry units based along the border, sources added. The Koreas technically remain at war, since the Korean War ended with an armistice, not a peace treaty, in 1953.

But under the Defense Reform plan, the Navy adopted the grandiose goal of becoming a Blue Water Navy, capable of operating across the seas and oceans. Under the reform, the Navy would add advanced destroyers using sophisticated weapons systems.

In that process, Korea may have neglected its own coastal defenses.

“Because of the Blue Water Navy plan, the focus shifted away from the North Korean Navy,” said Kim Hee-sang, former head of the now-defunct National Emergency Planning Commission, which handled national crisis management. It was later integrated with the Ministry of Public Administration.

“Retired Navy admirals say the Navy may be the weakest link of our military in wartime,” Kim added.

There’s also a budget issue. In 2009, the Navy’s budget was set at 29.6 trillion won, about 10 percent of the overall defense budget. Critics said the Navy was stretched thin trying to develop a Blue Water force.

“The Cheonan incident raised the question of whether we have even the basic defense capabilities to handle North Korea’s asymmetric force,” said Yun Duk-min, a professor at the Institute of Foreign Affairs and National Security. “We should reshape up our Navy and other branches and build strong deterrence. We have to be able to defend ourselves against North Korea before trying to go across oceans.”

Professor Kim Yeon-soo at the Korea National Defense University said the Cheonan incident was the result of South Korea’s “underestimation of North Korean threats amid the engagement North Korean policy” of previous administrations.

By mid-May, the Navy started reviewing its short- to mid-term plans, including improving radar systems on patrol ships and the sound navigation and ranging (sonar) systems. Also, the Defense Ministry put on hold its initial plan to cut the Marine Corps’ manpower from 27,000 to around 24,000 by 2020. Ministry spokesman Won Tae-jae said any troop reduction on the west coast will be determined after assessing the security situation after 2020.

Military experts also argue the South’s Navy should be armed with an anti-submarine guided missile called the Red Shark. Developed by the South Korean state-run Agency for Defense Development last year, the vertically launched Red Shark can travel about 20 kilometers (12.4 miles) in the air and is tipped with a torpedo called the Blue Shark, which travels at a supersonic speed underwater.

The Navy has been developing the Future Frigate Experimental (FFX) project since 1998. The Navy is set to spend about 7 trillion won to build 20 multi-functional frigates, with the displacement of about 2,300 tons. The first of the ships is scheduled to be unveiled by 2012.

But the Navy has not included the Korean Vertical Launch System (KVLS), which shoots the Red Shark, in the FFX plan. Military experts have said there isn’t enough room on the typical frigate to install the KVLS, although others say the Navy left out the system for financial reasons.

One retired Navy admiral, who requested anonymity, admitted that the Navy had paid comparatively less attention to anti-submarine operations in the west, and without the Red Sharks or the advanced sonar system, the South would lack options to counter submarines.

“It’s possible to equip frigates with the Red Sharks, and the KVLS would definitely increase the range,” the ex-admiral said.

Arguments for delaying the transfer of wartime operational control from the Americans to South Korea in 2012 have also gained traction. The two countries reached a deal in 2007 to give the command to Korea, but conservatives and retired military officers have expressed qualms about a security vacuum being created. They say that Korea may not be able to counter North Korea alone two years from now.

Earlier this year, Defense Minister Kim Tae-young said the transfer in 2012 would be “the worst-case scenario for the military” because the North could further bolster its nuclear capabilities by then.

Budgetary concerns may come into play, too. Defense Reform 2020 was built on the premise that defense spending would increase by almost 10 percent annually between 2005 and 2010. But this year’s budget went up by just 3.6 percent from a year ago. If South Korea is unable to live up to its own defense revamping plans, the logic goes, then it may need the presence of the U.S. forces here that much more.

“Even with advanced weapons systems in place, it will take time to put tactical systems in operation,” said a researcher at a state-run think tank. “Postponing the shift of the wartime command seems inevitable.”