As host of the next summit, Korea hopes to solidify its role as a global leader.

As host of the next summit, Korea hopes to solidify its role as a global leader. 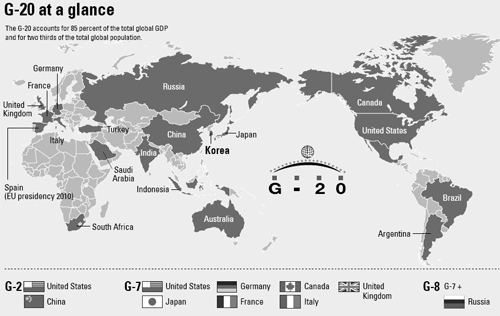 The whole country is going wild for the World Cup, which kicked off yesterday in South Africa, but when the monthlong competition comes to an end, there is an even bigger event awaiting Korea.

The G-20 summit, which the local media says will be the biggest international event Korea has ever hosted, will be held in Seoul in November.

The “G” in G-20 refers to “group.” Therefore, the G-20 is a group of 20 countries. The 20 countries are not selected at random, but are most of the biggest economies among the more than 200 countries in the world. 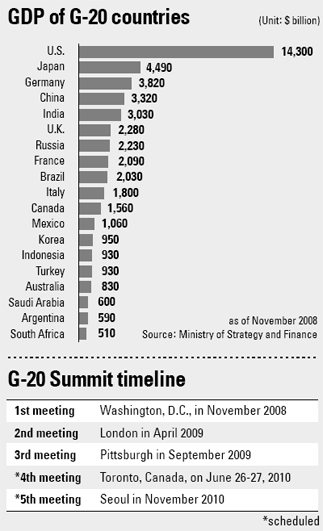 The G-20 member countries produce around 85 percent of the gross domestic product from all over the world. The number of people living in these countries makes up approximately two-thirds of the world’s population.

Playing host to the meeting of the 20 superpowers, in addition to being one of them, is a significant achievement for Korea.

How did it all start?

The bundling of influential countries actually began with the Group of 7. After the first oil shock in the early 1970s, in which oil-producing countries of the Middle East limited the supply of oil, six of the largest economies in the West along with Japan formed a consultative body to respond to the crisis.

Two years later, the G-20 was formed when the finance ministers from 20 countries - the countries of the G-8 plus 12 less developed but fast-growing countries - convened in response to the Asian financial crisis of 1997 to 1998.

At this point, however, the G-20 finance ministers’ meeting was still considered a supplement to the G-8.

That has been changing ever since the start of the worldwide economic crisis, which has been compared with the Great Depression of 1929.

This new crisis drove most of the countries of the world, especially the larger ones, into a panic when it started in 2007.

The 12 developing countries, however, had endured the crisis relatively well, causing the G-8 countries to wonder how they had done it.

The meeting was held in Washington in November 2008, and it involved not only the finance ministers, but also the countries’ top leaders. It was initially meant to be a one-time event, but the effectiveness of the summit and the continuing need for collaboration on the global economic crisis prompted the G-20 member nations to decide to meet regularly.

Their fourth meeting is scheduled for this month in Canada from June 26 to 27. Canada was originally scheduled to hold the G-8 summit, which still exists, but it was decided that it would host a G-20 summit instead.

The fifth meeting will be held in Seoul five months later.

What is Korea’s role?

At the upcoming G-20 summit in Seoul, a total of 40 countries will gather, including 20 guest countries that are not members of the G-20.

The number of participants is estimated to be around 20,000, including envoys, members of the press and other attendees.

The summit will not only bring valuable income to the tourism and business sector, it will also bring Koreans in contact with the expertise of scholars, business leaders and policy makers.

For Korea, the summit is the country’s first opportunity for global recognition since the 2002 Korea-Japan World Cup and the 1988 Seoul Olympics.

The government hopes the G-20 will allow Korea to make a greater impression on the global community than it did through the previous two events, because not only is Korea the host of the summit but it is also a participant.

Korea is the first country outside of the G-7 to chair the G-20 summit. Experts say that the leadership that Korea has shown through its swift reaction to the global economic crisis is what led Korea to be appointed as host of the upcoming summit. Its emphasis on policies seeking both economic growth and environmental conservation has also grabbed the world’s attention, the experts say.

Meanwhile, the government is hoping the G-20 Seoul summit will be an opportunity to further promote Korea as a global leader.

At the summit, one of the issues that will be discussed is the widening socioeconomic gap between rich and poor around the world.As a country with an economy whose size is between that of advanced countries and developing countries, Korea believes it can take the initiative in drafting measures to address this problem and help bridge the gap.

Korea has gone through its own process of economic development. Over the past six decades, it transformed itself from a poverty-stricken, war-torn country to the world’s 15th largest economy. The government hopes that this experience will allow Korea to earn the trust of developing countries as policies for addressing the problems they face are created.

The other major items on the summit agenda include: coordination of exit strategies, reform of financial regulatory systems, reform of the International Monetary Fund, and creation of a comprehensive agreement on global warming. Korea will have a voice in shaping policies to address these issues as well, experts say.

The government also plans to host a gathering of business leaders from the world’s advanced and emerging economies on the sidelines of the G-20 summit. The government hopes this so-called “B-20” will offer the private sector opportunities to collaborate on the global economic system.

Through those efforts, Korea’s newfound spot as a leading country will turn the “Korea discount” into a “Korea premium,” the government said.

The term “Korea discount” refers to the disadvantages Korea or its goods and services have suffered because of low awareness of the country or prejudice that the country produces low-quality goods or services. According to local research, goods or services made by Korea are still undervalued by 30 percent.

In addition to the G-20 and the B-20, there will be another summit called the Y-20 for young leaders from G-20 member countries.

The Y-20 group will draw up a list of agenda items that they will then submit to the G-20, giving young people a chance to voice their opinions in the global forum.