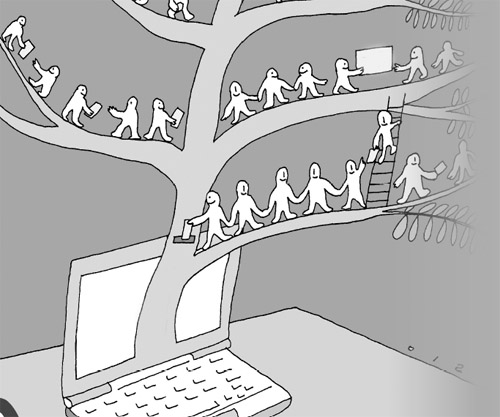 Here is a question for you to think about before reading along: What would your life be like without the Internet?

Don’t panic, but just take a minute to consider it.

Where would you go to search for the latest music or find a map to direct you to the hottest new store in town? How well would you be able to communicate with your friends, or with friends of friends, if you didn’t have e-mail or an electronic messenger service? Where would you go to vent about the latest gossip, while also getting instant feedback from people you know halfway around the world? How would you keep track of what your friends are doing from minute-to-minute?

If you’re like most teenagers today, it’s difficult to imagine life without the Internet. It’s even harder to imagine having to keep up with the people in your life without the wide variety of social networking sites such as Facebook, MySpace and Cyworld, or microblogging sites like Twitter and Me2Day, because they’ve already become essential tools for communication. 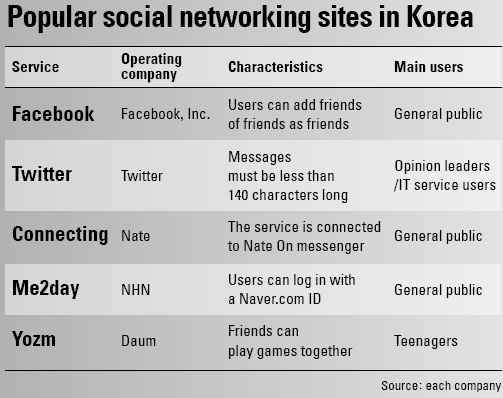 These sites allow you to represent yourself as an individual and interact with other individuals within your network by discussing ideas, disseminating information and sharing interests.

Although the Internet began to be used by the general population in the 1990s, social networking services are a rather recent phenomenon. But like the Internet, they have become extremely popular in a very short period of time.

Facebook - one of the most widely-used social networking sites in the world - was developed in 2006 by Mark Zuckerberg and a group of his friends. Facebook membership was initially limited to students of Harvard University, and later expanded to include students of Ivy League schools, until finally the general population was allowed membership two years later.

The service was revolutionary in the way that it helped people to find friends with similar academic backgrounds and friends they’d lost touch with long ago. If you subscribe to Facebook and log in, you can search for people, add them to your network and follow their activities.

Following the success of Facebook, a number of social networking sites sprang up in countries around the world.

One of these is Twitter, which was launched in 2006 by software architect Jack Dorsey.

Twitter is a mix of traditional blogging, text messaging and social networking services such as Facebook or MySpace that allow you to post updates about everything from what you just ate to who you’re hanging out with to whatever is on your mind.

Currently, Facebook is the leading social networking service provider, but Twitter has the fastest growth rate. It has been estimated that there are more than 150 million Twitter users around the world, of which 500,000 are in Korea.

Twitter’s growing popularity has been linked with its ease and flexibility of use. The site can be accessed through the Web site or applications developed for smartphones and other mobile communication devices.

Through Twitter, users can share ideas, news, simple notifications and hyperlinks. Twitter users communicate with each other using “tweets,” or short, text-based posts that are up to 140 characters long. Tweets are displayed on the user’s profile page and are also sent to the “followers” who sign up to receive the updates.

In her first message, written in May of last year, Kim wrote in Korean, “I’ve somehow found myself subscribing to Twitter. I’m eating lunch at the skating club [in Canada].”

Those two sentences were enough to send a flood of new Twitter users her way. After Kim won the world championship title in March 2009, people were suddenly interested in everything about the skater and her life and the Twitter post fueled people’s curiosity. Today, she has around 130,000 followers on her Twitter page.

Kim is not the only famous Korean Twitter member.

Along with the many Korean celebrities who now have large followings on their Twitter pages, there are a number of politicians, corporations and government offices that use Twitter in combination with other social networking sites to better communicate with their constituents, consumers and the public.

Automakers, for example, use social networking sites to promote their cars.

When Hyundai Motor, the nation’s leading automaker, decided to release its new Avante sedan in August, it started a blog and launched a Twitter page as part of its marketing scheme.

“With the increase in the number of smartphone users and the influence of social networking sites, especially among the young people, we decided to start a Web site with A to Z information about the new Avante,” an official from Hyundai Motor said.

Not to be outdone, GM Daewoo also started a blog prior to the release of its new sedan, the Alpheon, this August.

Twitter also played a role in the June 2 local elections. Before the elections, the ruling Grand National Party gave out smartphones to their politicians and encouraged them to connect to constituents through the microblogging site.

In the business world, Chung Yong-jin, vice chairman of the Shinsegae Group, and Park Yong-mann, chairman of Doosan Corporation, are well-known Twitter users. Recently, when Korea was down 1-0 during its World Cup match with Nigeria, Chairman Park cheered the team on his Twitter site, saying: “Fighting!” When Korea scored a goal, he posted a second message that said: “First goal!” He posted similar messages throughout the game.

Samsung Group also has a Twitter account and it used the service to announce the return of Chairman Lee Kun-hee.

Meanwhile, local portals have introduced services to compete with Twitter. SK Communications’ Nate introduced a service called Connecting and Daum has Yozm. NHN, the operator of Korea’s largest portal Naver, launched Me2Day, the first microblogging service offered in Korea, in 2007. As of March, Me2Day had one million subscribers.