What is augmented reality?

What is augmented reality? 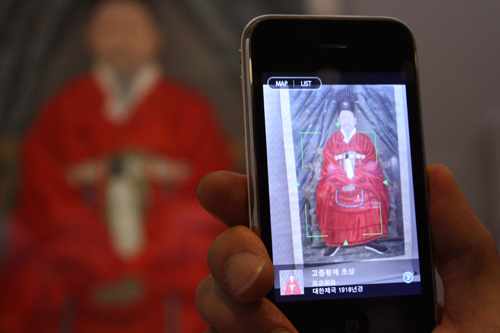 An augmented reality application developed by Korea Institute of Science and Technology allows people to point their smartphones at Korean relics and get information pertaining to them on the device. [YONHAP]

People sometimes want to escape reality - to see things that are not there, be things they’re not, do things they can’t.

With modern technology we can blur the lines between what’s real and what’s not.

We’ve all experienced this in one way or another: 3-D films like James Cameron’s “Avatar” make us feel like we are actually exploring Pandora ourselves and rubbing elbows with the Na’vi.

Effects such as these are made possible through augmented reality, which has emerged as one of the hottest technologies - and one of the most flexible marketing tools - both in Korea and abroad. 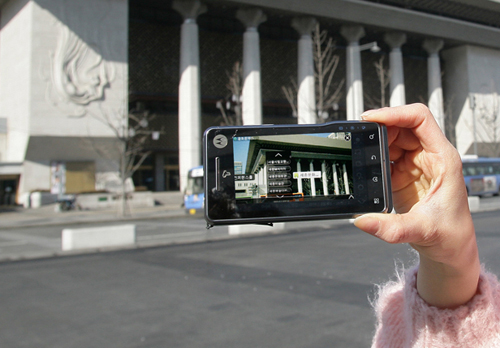 SK Telecom, Korea’s No.1 mobile carrier, introduced an application that uses location-based and augmented reality technologies to provide information about a certain location or facility at the user’s request. Provided by SK Telecom

The name, augmented reality, sounds like something so advanced and so highly specialized that we only associate it with sci-fi movies. But in reality it has more daily uses than people would imagine.

Malaysia Airlines uses it. Calvin Klein, the U.S. fashion brand, uses it, too. Even Ben & Jerry’s, the U.S. ice cream company, uses it. And these are just a few of the companies rushing to utilize the technology to attract customers to their products.

By definition, augmented reality enhances people’s perception of reality through the use of computer technology.

While this technology is relatively young, and thus different experts will have different definitions of it, most experts would agree on the three basic ingredients: the combination of the real and the virtual, presentation in real time and the use of computer technology.

People generally trace the origin of augmented reality to the Sensorama, a machine created in the 1950s by Morton Heilig (1926-1997) who was a cinematographer and one of the forefathers of virtual reality. The Sensorama gave people an immersive, multi-sensory theater experience and as a result was dubbed “Experience Theater.” However the Sensorama came before the era of digital computing, and was more of a mechanical device.

Augmented reality is known to have been used for the first time by Boeing, a Seattle-based aerospace and defense corporation, in the 1990s, when this strange sounding term was coined.

Thomas Caudell, then the senior principal scientist and principal investigator at the company, used the term to help engineers assemble aircraft. Caudell, now a professor at the University of New Mexico, was quoted on the university Web site as saying he became interested in augmented reality because “he wanted to be able to visualize brain-like circuits.”

To better understand this technology, let’s look at some examples of augmented reality in sports and pop culture.

The classic example is the scores people see on television during a sporting event.

In addition, in televised broadcasts of American football games, the yellow lines drawn over the televised image to mark a team’s “first down” are drawn in real time with the help of computer technology.

Similarly, in ice hockey games there is a virtual colored trail showing the location and direction of the puck, and in televised swimming events, there is often a line pointing to where the current world record holder is at the time.

Augmented reality offers richer visual effects in films, as well. In one scene in the 2002 film “Minority Report,” Tom Cruise stands in front of a transparent computer screen manipulating documents and images with his hands. The technology that helped bring this scene to life was augmented reality.

Augmented reality technology is also used by a variety of companies.

Malaysia Airlines has developed an augmented reality service to promote its special offers. People with smartphones can hold the device in front of them to get information on the surrounding airports and special flight offers.

Calvin Klein created a billboard ad in New York City using augmented reality. People with smartphones can point to the billboard and see a beautiful model frolicking with her friends, whereas those without such devices will see only a two-dimensional image code (called a quick response code).

Ben & Jerry’s, meanwhile, has launched an augmented reality software program that allows consumers to point their smartphones at certain pints of ice cream and see virtual dioramas related to those flavors.

In Korea, augmented reality is also used in areas like tourism, clothing and cosmetics.

With these services, people are able to access a wealth of real-time information about area attractions - including history, operating hours and admission fees - simply by pulling out their trusty smartphones.

For instance, pointing your smartphone at Gyeongbok Palace in central Seoul will shower you with information about the tourist attraction.

Besides providing basic information about major attractions, the new software also provides a slew of other services that add to the fun of sightseeing. For instance, people can map out a course for the day and the service will guide them to each destination. The service also allows users to upload pictures, post messages on social networking sites like Facebook and Twitter as well as access information and reviews on nearby restaurants.

“We believe this technology can take tourism to the next level, where people plan, record and share their trips using their smartphones,” said Jung Man-won, SKT’s CEO.

“The new mobile service should attract potential tourists and revitalize the tourism sector in the country,” said Lee Charm, the head of the state-run Korea Tourism Organization.

With the rising popularity of smartphones in Korea, more and more companies are rushing to capitalize on this new technology.

Samsung SDS, Korea’s information and communications technology provider, recently applied the technology to a virtual reality program from local drugstores. The program allows people to try cosmetic products without actually putting them on.

And earlier this year, Bean Pole, a domestic clothing brand, used the technology to show its models, members of K-pop group 2NE1, sporting its latest clothes on 3-D screens in its shops.