Democratic Party Representative Kim Young-jin speaks at an opening ceremony for an exhibition on the occasion of the 100th anniversary of Korea’s forced annexation by Japan at the National Assembly Library Friday. By Oh Sang-min

This Sunday marks the 100th anniversary of the annexation of Korea by Japan, which took place when the Japan-Korea Annexation Treaty went into effect. Korean Emperor Sunjong refused to sign the treaty, but the prime minister illegally signed it in his stead on Aug. 22, 1910. To this day, the Japanese government has not acknowledged that the treaty was illegal, a fact that still causes controversy and protest in Korea.

This three-part series will focus on the history of the annexation, the tragic legacy of colonialism and what lies ahead for both countries in the future.

To the delight of many and the dismay of some, Japanese Prime Minister Naoto Kan issued a formal apology for the colonization of the Korean Peninsula from 1910 to 1945 two weeks ago, on Aug. 10. Immediately after the announcement, responses began flooding in. Most Korean politicians were appreciative of the apology but added that there were still important issues to be resolved.

What could have happened in 1910 that the leaders of Korea and Japan are still struggling to set straight a century later?

Yi Tae-jin, professor emeritus of Seoul National University, said in an interview with the JoongAng Daily that Japan’s desire to invade Korea can be traced back to the 1870s, 40 years before the annexation of Korea. For years, Yi has played a pivotal role organizing gatherings of Korean and Japanese scholars to denounce the annexation treaty and call on Japan to acknowledge that it was illegal under international law - an admission that country has still not made.

The United States forcefully opened Japan, then governed by the Tokugawa shoguns, to foreign trade with the Treaty of Kanagawa in 1854. Anger at the weakness of their government and fear that Japan would fall to Western colonialism like China before it led to a revolution. The shoguns fell and the emperor regained political power in the Meiji Restoration in 1868. The only way to avoid subjugation, the new government believed, was to become a world power.

As if imitating the behavior of the United States decades earlier, the Japanese military intimidated Korea into signing the Treaty of Ganghwa in February 1876. The treaty opened three Joseon Dynasty ports to Japan on very favorable terms and exempted Japanese citizens from local law. It also ended Korea’s tributary relationship with the Qing Dynasty in China.Three years earlier, however, Empress Myeongseong had overthrown the pro-Japanese regent Heungseon Daewongun, and Japan was forced to compete with Russia and China for influence over Korean internal affairs.

As part of this effort, in 1885 Japan sent Ito Hirobumi, who would later become Japan’s prime minister, to China to negotiate the Convention of Tientsin, which called on both sides to withdraw their militaries from Korea but was practically ignored. Japan refused to leave, and when a peasant uprising known as the Donghak Peasant Revolution began in 1894. it helped trigger the first Sino-Japanese War - the beginning of major Japanese military operations to conquer Korea.

“The plan to invade Korea was thought out extensively,” said Yi. “These were all soldiers at the helm [of the government], so everything was based on the military. However, in the eyes of the international community, they couldn’t invade the country in an obvious manner, so they emphasized the importance of foreign policy and started wars with China and Russia to bully Korea into complying with Japan.” 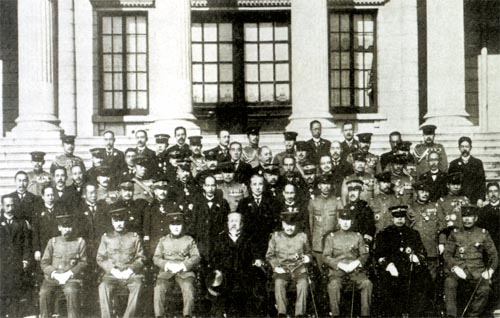 This group photograph was taken just after Japan’s annexation of Korea in front of Deoksu Palace in Seoul. It depicts Emperor Gojong, the bearded figure seated at center in the front row, with his fourth son and eventual successor Sunjong seated just to the right and his seventh son Yongchin seated to the left, next to Masatake Terauchi, the new governor general of Korea. [JoongAng Ilbo]


Japan eventually defeated the Chinese, who signed the Treaty of Shimonoseki in April 1895, ceding the Liaodong Peninsula, Taiwan and the Penghu Islands to Japan “in perpetuity.” China was also forced to pay reparations to Japan and to permit it to conduct trade along the Yangtze River and in four coastal ports.

After the war, Korea was still reeling from the unrest of the anti-foreign Donghak rebellion when Japan made its next move. At the time, Emperor Gojong and Empress Myeongseong were strengthening ties with Russia to curb the growing influence of a rival Korean political faction that favored a closer relationship with Japan.

Then, shortly after the signing of the Treaty of Shimonoseki, Russia, France and Germany began applying pressure on Japan to return the Liaodong Peninsula to China in an event known as the Tripartite Intervention. Japan, unprepared for a military confrontation with all three colonial powers, reluctantly complied.

Then in October, feeling Japanese power in Korea weakening due to outside interference, Minister to Korea Miura Goro sent agents to Gyeongbok Palace in Seoul to assassinate the stubbornly anti-Japanese empress. After killing the palace guards, the agents rushed to the Empress’ quarters where they killed her, later burning her corpse.

News of the assassination led to a diplomatic incident, and to ease the concerns of Western powers the Japanese government put the military personnel involved on trial. All were acquitted by a court in Hiroshima on insufficient evidence. 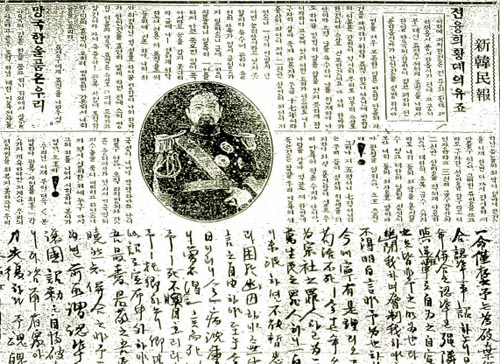 Emperor Sunjong’s last words were published in the Shinhanminbo, a paper run by Korean-Americans in San Francisco on July 8, 1926. In the statement he repudiated the annexation traty and said the Japanese had imprisoned and threatened him.


With the empress out of the way, Japan moved quickly to consolidate its power in Korean politics. In the months to come it would win development rights to a slew of natural resources in the country, including mines, fisheries and forests.

One obstacle remained: Russia. After negotiations that would have allowed Japanese merchants access to Russia’s sphere of influence in China failed, Japanese military forces attacked a Russian naval ship in Incheon Harbor in February 1904, starting the Russo-Japanese War.

“With everything that Japan did, they always made sure they had all the right legal documents, and the emphasis on treaties and conventions was huge because Japan wanted to have legal backing to all that they did,” said Yi. “But not during the war. It was a very shoddy affair.”

A year after Japan won its war with Russia, in September 1905, its plan to take over Korea accelerated to take advantage of international surprise at the Japanese victory and the internal turmoil it had caused in Russia.

Japan wrote the Eulsa Treaty, which deprived Joseon of its diplomatic sovereignty and made it a protectorate of Japan. Again, the emperor, whose signature was necessary under Korean law, refused to sign, but five of his ministers did sign the treaty. They are today known in Korea as the Five Eulsa Traitors. 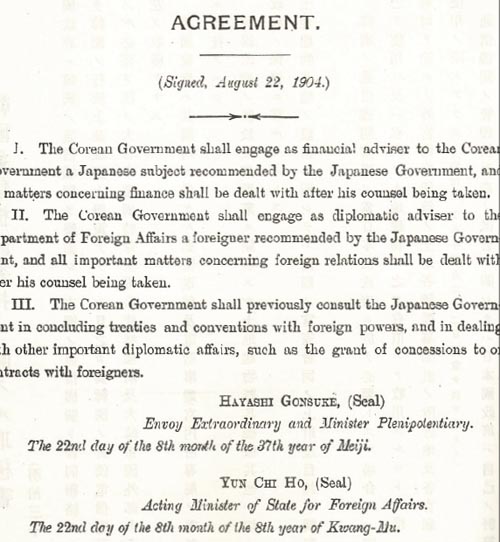 The English-language text of the First Korea-Japan Agreement, the forerunner of a series of more and more demanding unequal treaties between the two countries culminating in annexation. Provided by the Seoul National University Library


Enraged, Emperor Gojong had an official statement published in a Seoul newspaper, the Korea Daily News, and wrote personal letters to the leaders of several Western powers informing them that the treaty was illegal. He even dispatched three agents to the second international Hague Convention in 1907 to tell the world of the unfair treaty, but they were not permitted to enter the venue.

Learning of Gojong’s machinations, the Japanese military forced the emperor from the throne in July 1907 and replaced him with his son Sunjong, who was 33 at the time.

Soon after Emperor Gojong’s abdication, the Japanese disbanded the Korean army and took over all political, administrative, legal and military power in Korea. Emperor Sunjong’s brief reign officially ended in 1910, with the annexation of Korea.

On Aug. 22, the Japan-Korea Annexation Treaty was signed by representatives from both countries. The treaty went into effect seven days later, and on Oct. 1 Masatake Terauchi was elevated from resident general of Korea to become its first governor general.

To justify the move, Japanese officials argued that Asian peoples needed to band together - led by Japan - to resist the West.

“Japan established a committee in June 1910 to ready all the documents needed for the annexation, which were signed by [Korean Prime Minister] Lee Wan-yong. They tried so hard to convince those abroad of the legitimacy of the annexation, saying it was for the good of the nation.

“Emperor Sunjong was forced to release a royal rescript on the treaty, but he left a will when he died in 1926, which was published in a paper based in San Francisco, asserting that he did not sign the document,” the professor said.

In the 35 years that followed, Japan planned to cement its dominance over Korea in stages, militarily, culturally and spiritually.

First, Japan would forbid Koreans from participating in any military, political or cultural organization. Then it would encourage Koreans to become pro-Japanese, giving incentives to those who did. In the final stages of colonization, the Japanese government hoped to force Koreans to worship the Japanese emperor, immerse them in Japanese culture and encourage them to inter-marry with Japanese.

Many of these plans were cut short, of course, when Japanese rule of Korea ended on Aug. 15, 1945, with Japan’s defeat in World War II.

*Tomorrow, the next article in the series will spotlight problems that have bedeviled Korea-Japan relations for decades as a result of the annexation, including the comfort women issue, the Dokdo territorial dispute and the controversy over Japanese history textbooks.