Why are discount chains expanding online?

Why are discount chains expanding online? 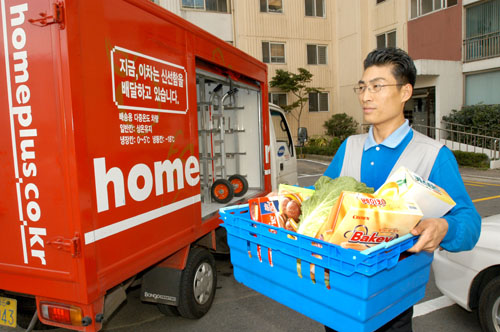 A Homeplus delivery specialist shows goods that a customer ordered online. Provided by the company

Some people go to discount stores to buy groceries or just to taste food samples. The stores are usually so busy that most people want to get in and get out as fast as possible. But nowadays, more people are choosing to forego the hectic crowds to instead shop online, for everything from fresh vegetables and poultry to discount clothing.

Shopping online is as easy as clicking your mouse. After visiting the online Web site run by your favorite discount store, putting the item of your choice into your “basket” and paying with a credit card, the products are delivered to your home in a matter of hours.

So why are discount stores that are always full of customers putting more of their energy into operating online? And, will offline stores eventually disappear? 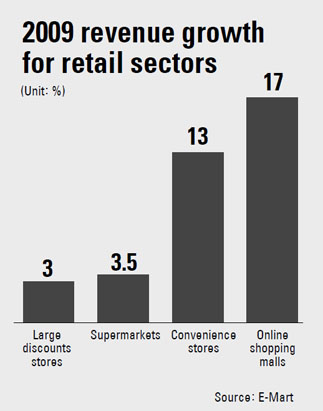 Currently, there are more than 400 large discount store branches all over Korea. Even in your neighborhood, chances are there is a discount store location nearby - an E-Mart, Homeplus or Lotte Mart. Experts predict that saturation in Korea is 470 stores. If more are built, there will be too many discount stores for the number of customers, causing a loss in profit. In other words, only 70 more discount stores can be viably opened.

Moreover, customers’ shopping patterns have begun to change. Since the short economic downturn, penny-pinching has become common. Some might have heard their parents say: “Let’s not go to the discount store, since we often end up buying things we don’t need.”

The increase of double-income couples or singles that live alone is also affecting purchase trends. These people often buy only the amount they need at a neighborhood supermarket or convenience store.

Because of these trends, the number of customers who visit large discount stores is flagging. The speed of growth for Korea’s large discount stores has slowed steadily. According to the “2010 Retail Industry Forecast” released by the Korea Chamber of Commerce and Industry, the rate of growth for the large-discount-store sector, which grew a healthy 13 percent annually from 2001 to 2007, has fallen to 3 percent annually since 2008.

Discount chains have begun to look for alternative growth engines - and many have found their answer in online shopping malls.

Online markets in which people buy and sell products over the Internet have seen brisk growth.

Naturally, large discount stores have taken online shopping malls very seriously - not just as a side project, but as a main channel to sell their goods.

Homeplus opened its online shopping mall in 2002. Back then, it had 25,000 items available for sale online, including fresh produce, as well as home appliances and clothes. However, there weren’t many customers who shopped online at the time.

Homeplus announced a plan to redesign its online shopping mall only last May. The amount of items for purchase will be expanded to 1 million by 2013 - 50 times its current product selection.

In order to do this, Homeplus decided to stock products once neglected by large discount stores. These include large furniture such as beds and closets, and specialized selections such as popular imported baby products.

How do discount stores deliver fresh produce and other goods in a reasonable amount of time?

Homeplus has solved that problem by increasing their delivery from four times a day to 10 times a day. The service has cut delivery time in half, from the previous four hours to two hours.

Its “delivery memo” service is proving popular as well.

For example, when ordering fish, the customer can specify in the memo that it’s for roasting or boiling, and needs to be cut in three pieces or four. The fish will be prepared and delivered as per the specification - without a word exchanged with the store clerk.

This has led to a steep increase in working professionals using these online malls. The ratio of customers who choose to receive their orders after 7 p.m. - past working hours - has jumped from 3 percent of total orders in 2002, to 23 percent in 2009. Homeplus plans to use this momentum to increase its revenue by more than 1 trillion won ($862 million) by 2013.

E-Mart, Korea’s No. 1 discount store chain, is also stepping up its online operations.

First opened in December 2000, E-Mart’s Internet shopping mall, E-Mart Mall, had its design improved in August 2008 and was completely overhauled in July 2010.

It also delivers food 10 times a day, but E-Mart Mall has put its focus on fresh produce. One-thousand five-hundred regional delicacies such as seaweed from Hwangje Island are also available.

The online mall has instituted a store pickup service for the first time in the domestic industry.

Having started its Internet shopping service in February of 2007, Lotte Mart is a latecomer to the online shopping mall business - but has distinguished itself by drastically expanding the area where deliveries are available, with same-day delivery possible for most of the nation.