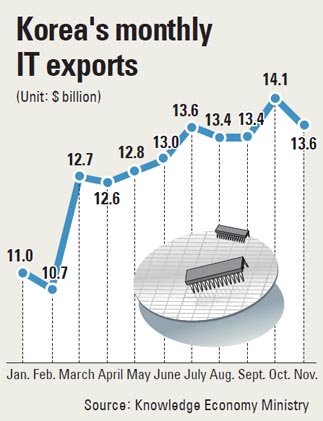 Korea’s information technology exports surged 16.1 percent to $13.6 billion in November from a year ago, boosted by growing overseas demand for semiconductors, flat screens and smartphones, the Ministry of Knowledge Economy said yesterday.

It is the sixth consecutive month that the country’s IT-related exports exceeded the $13 billion mark.

The ministry said that semiconductor exports increased 18.1 percent to $4.13 billion, while display panel exports rose by 9.5 percent to $2.73 billion.

Mobile phone exports increased 8.7 percent to $2.7 billion, led by the export of smartphones. Korea exported a total of $1.06 billion worth of smartphones in November, which is an increase of 207 percent from a year ago. The sharp rise was due to this year’s introduction of the Samsung Galaxy S and other Korean-made smartphones.

Foreign demand for computers rose more than four-fold to $268 million, mainly because of tablet PCs.

IT exports to the United States and Japan each surged 33 percent to $1.81 billion and 19.3 percent to $760 million, respectively, boosted by higher demand for smartphones and other mobile phones.

Exports to China, including Hong Kong, increased 16 percent to $5.84 billion.

Exports to Asean countries surged 20.2 percent to $1.28 billion and to countries in Oceania by 42.9 percent.

Meanwhile, exports to European Union nations dropped 2.7 percent to $1.7 billion because of the region’s recent fiscal crisis, which has resulted in lower demand for flat screens, mobile phones and television components.

The country’s total IT exports reached a record $140.9 billion for the January-November period, exceeding the previous record of $131.2 billion in 2008.

IT imports jumped 27.6 percent to $7.02 billion mainly led by domestic demand for computers and related devices, along with electronics components.

It is the first time that the country’s IT imports exceeded $7 billion.

The country’s trade surplus in the IT sector for the January-November period reached $72.1 billion, which is bigger than the previous record of $60.4 billion in 2007. The IT trade surplus last month was $6.59 billion.

The ministry predicted that total IT exports would amount to around $150 billion in 2010, while trade surplus in the IT sector will be around $78 billion.