CEO tracks the history of whiskey in Korea

CEO tracks the history of whiskey in Korea

Alcohol can do a lot of things, the worst aspects of which are well-documented. But in its very best incarnation it can temporarily relieve burdens.

And if this positive aspect of alcohol could be personified, it might look like Peter Prentice, whiskey manufacturer Chivas Brothers’ regional vice president.

Chivas Brothers, a whiskey brand owner that traces its origins to the beginning of 19th century Scotland, is an affiliate of the global Pernod Ricard Group.

It owns high-end and locally beloved whiskey brands such as Ballantine’s, Chivas Regal and Royal Salute.

Prentice, who has been at his post since 1999, has been instrumental in Chivas Brothers’ concentrated investment in Korea during the last seven years. The company supports events such as the Ballantine’s Championship, the only European Tour golf event held in Korea, and the Mart of Respect Award, which honors an eminent figure in Korean arts and culture annually.

During a visit to Korea last month to present the award, Prentice sat down with the Korea JoongAng Daily to look back at the changes in Korea’s whiskey market since his first visit in 1983.

Q. What is the standing of Chivas Brothers in the Pernod Ricard Group? 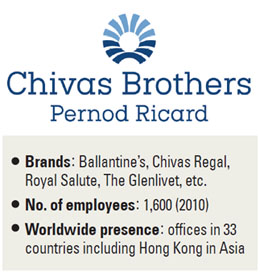 A. Chivas Brothers is the pre-eminent company in Pernod Ricard in terms of its brands, such as Ballantine’s, Chivas Regal, Royal Salute, everything the group makes in Britain. It’s the biggest individual brand-owner production company within Pernod Ricard, producing more than 15 million cases yearly.

What is the Korean whiskey market’s importance?

Korea is a very important market for scotch whiskey. Very few people know this - when I tell them that Korea is more significant than Japan, many people are surprised. Korea is easily the No. 1 premium market in the world. What’s interesting in Korea is that the whiskey market starts at 12-year-old whiskeys and older, of which it imports about 3 million cases a year. Taking a look at other Asian nations, Japan is maybe 1 million cases of 12-year-old scotch and older, and Thailand is a big whiskey market of well over 2 million cases - but it’s standard whiskey.

A lot of people are talking about the whiskey market in China, but it still consumes under 2 million cases, so the Korean market still occupies a strong position.

How has the Korean market progressed?

When I first came here in 1986, Korea did not really have a domestic market except a small but important duty-free business, because there were very strict duties and import restrictions on Scotch. But around 1990, the Korean market was liberalized. And this was the age when Chivas Regal became the flagship whiskey of Korea, became very popular. Chivas Regal, as you know, was the favorite whiskey of President Park Chung Hee.

There has been cyclical behavior with the Korean economy ... And the whiskey market has reflected such ups and downs in the economy at large by seeing dips and peaks. But on the whole, the market has been generally going upward in revenue.

And (Korea’s) influence is way beyond Korea as well, because Korean consumers, their love and knowledge of Scotch become really important for the whiskey industry in the world of duty-free sales.

Maybe 20 years ago, Japanese travelers were the driving force of duty-free sales of Scotch, but we can definitely say that Koreans are now the whiskey industry’s most influential consumers in duty-free. When we talk about the domestic whiskey market in Korea, we have to (take into account) Korean travelers when they go to foreign cities, in terms of the volume and quality of whiskey they buy.

And the thing is, although whiskey is well-known and loved in Korea, it is still outpaced by beer and soju in volume of consumption. So we believe that whiskey still has room to grow.

You are from Scotland. How do the drinking habits of Korean citizens and your countrymen differ? And may I ask who is the better drinker?

When Colin Scott, the master blender of Chivas Brothers, is blending whiskey, he will mix whiskey with water 50-50 at room temperature to get the perfect flavor. He would smell it, because the nose is the key - and that’s actually the way we usually drink whiskey in Scotland. A lot of people say that it’s wrong to add water to scotch whiskey, but in Scotland we’ve got a pretty open mind to how we drink whiskey. We even have a drink of whiskey, hot toddy, that’s very popular in the wintertime - whiskey, hot water, lemon and honey. But Koreans appear to drink Scotch neat more often. I think Koreans and Scots are both excellent drinkers. We both drink to enjoy, and I think drinking in both countries is about friendship, being together, brotherhood.

A key marketing emphasis of Pernod Ricard Korea seems to be brotherhood.

That’s true. A very important word for Pernod Ricard is conviviality. Pernod Ricard has got a very family-style relationship (within the group). That sort of strong bond and respect is very important. One can be selling Ballantine’s and Royal Salute, and forget that we are actually in the entertainment industry. We’re a catalyst and a lubricant to bring people together to have a good time.

Could you tell us a little about your local marketing efforts?

Our top two events in Asia for Chivas Brothers are both in Korea - the Ballantine’s Golf Championship, and the Mark of Respect Awards. Both events were begun between the last four to six years.

In the last decade Chivas Brothers has increased its investment in Korea. We brought the first European Tour golf event to Korea ... which has righted,

I think, a massive oversight ... given that Korea did not have a major golf tournament, despite the influence of Koreans in golf. And the Mark of Respect Awards is a perfect fit for the Royal Salute brand, as it honors an eminent individual in the arts.