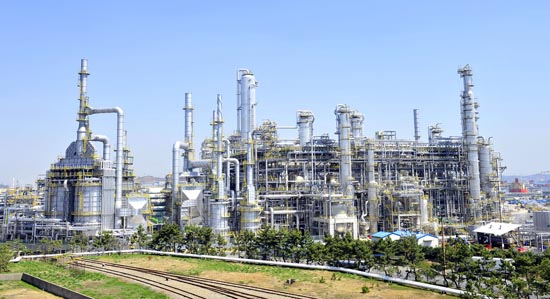 S-Oil has completed its Onsan Refinery Expansion Project. This represents the world’s largest paraxylene plant and will make the refiner the largest supplier of chemical textiles in Asia. Provided by the company


Cooperation with Saudi Arabia may see Korea become the world’s biggest supplier of chemical textiles as the two sides have set a new milestone in the petrochemical world.

“The relationship between S-Oil and Saudi Aramco provides a successful model of economic cooperation and symbolizes the friendship between Korea and Saudi Arabia,” President Lee Myung-bak said in a speech.

The gathering was attended by around 1,000 officials including President Lee Myung-bak, Saudi Minister of Petroleum and Mineral Resources Ali Al-Naimi, Saudi Aramco President Khalid A. Al-Falih and Chairman of Hanjin Group Cho Yang-ho.

State-run Saudi Aramco, the largest oil supplier in Saudi Arabia, owns a 35 percent stake in S-Oil, making it the biggest shareholder. Since forging their partnership in 1991, the two companies have been closely collaborating for 20 years, helping S-Oil become one of Korea’s top refiners.

With an injection of 1.3 trillion won ($1.14 billion), S-Oil’s PX production capacity has more than doubled to 1.7 million tons a year, marking the largest capacity at a single plant.

PX is best known as a raw material for chemical fibers and water bottles. With the opening of the new plant S-Oil’s annual capacity will be equivalent to the wool of 340 million sheep, which can produce up to 3.4 billion pieces of clothing, according to the company.

The company is pinning high hopes on its PX plant as it expects exports to grow by $2 billion a year given steady growth in demand from China.

Also, since the price of the material has been hovering above $1,400 per ton for months, the company anticipates more than a 20 percent increase in its operating profit.

“Expansion of the plant goes beyond plant construction and serves as a springboard on which S-Oil will consolidate its core growth engine to lead our future growth and create greater economic profits, thereby contributing more to the local communities and the national economy,” Ahmed A. Subaey, the CEO of S-Oil said.