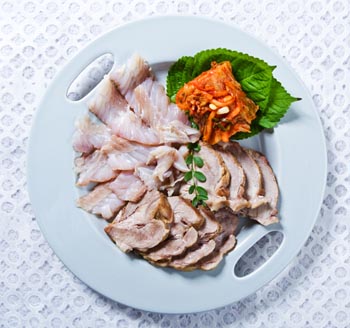 One of the most difficult dishes to get used to in Korean cuisine for foreigners and locals alike is sliced fermented skate. Some even say that Swedish fermented herring, also notorious for its distinctive, fermented taste, has nothing on Korea’s fermented skate.

The dish in Korean is called hongeo samhap. Hongeo means skate and samhap translates as “harmonious trinity,” referring to the three elements of the dish - fermented skate, boiled pork belly and kimchi. The fermented skate at first has a foul odor that is similar to the smell of ammonia, but many Koreans say that after a while the taste of this fermented fish is addictive.

The dish is said to originate from Heuksan Island in South Jeolla, where fishermen discovered the main ingredient in hongeo samhap by accident.

Heuksan Island is famous for its high-quality skate fish. During the Joseon Dynasty, the skate from Heuksan Island was often brought to other parts of the country by boat. During this process, the fishermen discovered that even after a long journey, skate was still edible and that the fermentation that took place gave the meat a great, chewy texture and a slightly stinging sensation in your mouth.

The boiled pork belly and kimchi was originally served with the fish due to the fact that the skate was costly and rare. However, food experts now say that the three ingredients are extremely complimentary, as the pork gives a heartiness to the dish while the kimchi mitigates the grease from the pork as well as accentuating the fermented taste of the skate.

During the Joseon Dynasty, hongeo samtak (the same dish but including alcohol) was a favorite dish for parties and get-togethers and was served alongside makgeolli, or Korean rice wine. The dish is still eaten most with makgeolli, which also aids in diluting the rather pungent taste of the fermented skate.