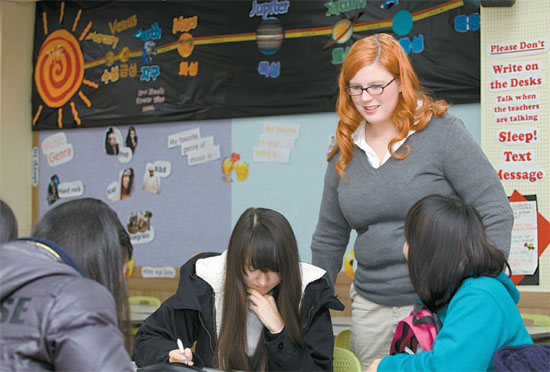 Margaret Morris, an American English teacher at an all-girls high school in Suyu, Gangbuk District, northern Seoul, who will lose her job in August, teaches during a winter holiday English program on Dec. 28. By Park Sang-moon


When Margaret Morris lost her job as a teacher at a high school in Tennessee due to budget cuts, a friend teaching in Seoul told her to hop on a plane.

But when her one-year contract with the Seoul Metropolitan Office of Education expires next August, Morris will once again be out of a job because of budget cuts.

“The school that I’m working for told me that they can place me either in an elementary or a middle school, but I’ve already started the application procedure to teach in a university,” Morris said. “I am happy to be here, and I don’t want to leave.”

A total of 255 foreign English teachers currently working at high schools in Seoul will have to start looking for a new job after the Seoul Metropolitan Office of Education decided to use its 4.4 billion won ($3.8 million) budget in other ways.

After August, there will be no native English speakers teaching the language in Seoul’s public high schools.

The teachers are disappointed. They said they believed in the Lee Myung-bak administration’s policy of improving Korean students’ English, started in 2009, which was also supposed to diminish the gap between rich and poor students by giving good English education in public schools, especially in the capital.

“I heard that the government was continuing to expand the number of foreign English teachers coming here,” Morris said. “But now they want us gone.”

The education office also said it will gradually cut the budget for foreign teachers in elementary and middle schools too.

“The credibility [of the Korean government] is lost for the teachers who care enough to know what’s going on politically,” said Mark Mckeon, 24, who works at an elementary school in Seoul.

Starting from August 2009, the government hired 2,996 foreign English teachers in elementary, middle and high schools across the country, and the total number reached 6,255 as of last February. The government opens new positions in February and August.

The official goal was to “enable Koreans who graduate from high school to have conversations in English.”

But last November, the Seoul Metropolitan Office of Education, which is controlled by rival parties to the ruling Grand National Party, announced the results of a public survey on the city’s English education policy and changes to the policy based on the survey.

However, 62.4 percent of the parents and students said foreign English teachers are definitely needed.

As a result of the survey, the education office said it will “downsize the project to place native English teachers in high schools but focus on having them in lower grades.” It said that part of the budget used to hire the foreigners could be redeployed to give language training to Korean English teachers.

“The survey showed that more parents preferred Korean teachers who are fluent in both English and Korean over foreign English teachers,” said Kim Jong-wook, a member of the Seoul Metropolitan Council from the Democratic Unity Party.

According to Choi Chun-ok, a supervisor at Seoul Metropolitan Office of Education, the survey results showed that the “efficacy of foreign English teachers is not as high as the amount of money that gets allocated to the project.”

The teachers say the program hasn’t worked too well because the city hired native speakers without any qualifications.

“They took so many people who either did not major in English or who have had no teaching experience at all,” said Morris. “People with no experience think teaching is an easy job, and they don’t know what it takes. It’s not just babysitting.”

Stephanie Chao, 28, who also came to Seoul in August from New Zealand to teach at an elementary school in Chang-dong, northern Seoul, said she is “upset by the government’s decision” and insisted the government doesn’t really know what’s going on in the classrooms.

“I don’t think the current Korean co-teachers for English classes are up to teaching conversational English,” she said. “They lack fluency and pronunciation skills, and that’s where we come in,” Chao said. “I heard from other foreign teachers that their Korean co-teachers just stand at the back of the class and watch.”

Some foreign teachers want to lash back at the government’s decision, but they’ve been warned not to.

“Numerous foreign English teachers in Seoul were considering holding protests or taking some form of collective action to express dissatisfaction with the new plan,” Chao said. “But an official from the education office told us that wasn’t a good idea. He said Koreans would only hate us even more.”