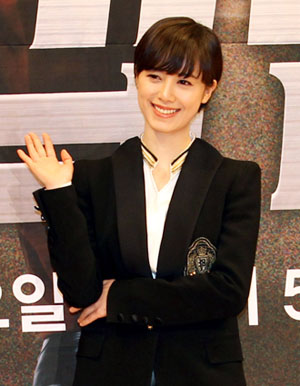 Actress Ku Hye-sun has returned to television with a new role as a headstrong pilot.

The 28-year-old actress appeared at a press conference on Jan. 3 to promote her newest drama series “Take Care of Us Captain,” which airs Wednesdays and Thursdays on SBS starting Jan. 4.

Like her character, assistant pilot Han Da-jin, Ku is passionate about a woman’s right to work.

“People often say that Korean society has changed a lot but I still think there should be more jobs for women,” Ku told reporters. “I think it’s good to tell stories [of women who are working in the male-dominated world in films and dramas. That’s why I chose this role.”

When asked why she chose a role that is so similar to her previous roles, she said that although she had considered turning it down, “But I love stories about hopes and dreams,” Ku said.

To play the character, Ku learned how to fly an aircraft using a cockpit simulator.

“I thought it would be similar to driving a car but it was very different,” Ku said. “I’ve come to admire people who fly airplanes.”

Ku made her debut in a TV commercial in 2002 and went on to roles in drama and film. Later, she went beyond acting to direct a short film, “The Madonna,” in 2008.