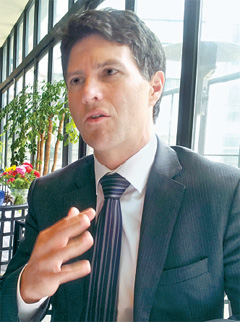 The Australian state with the largest Korean population in the country is currently investigating prostitution involving Korean women, according to a member of the state’s parliament.

Victor Michael Dominello, a member of the New South Wales Legislative Assembly, said that the investigation started at the request of the Korean multicultural committee he set up.

More than 1,000 Korean women are estimated to be involved in prostitution in Australia, a number that increased sharply in recent years, according to data from an Australian civic group. Some data say that about one-sixth of all women providing sex for money in Australia are Korean.

As the numbers grew, the prostitution issue emerged as a diplomatic concern between Korea and Australia.

Governments of the two countries upgraded bilateral cooperation on the issue late last year, launching discussions on possible countermeasures that could be taken against illegal prostitution in Australia. Possible actions to be taken will be announced once the committee completes its investigation.

Educating women about resources available to them to pursue other livelihoods will be part of whatever the committee decides to do, Dominello told the Korea JoongAng Daily during a trip to Korea. The Korea Foundation arranged an April trip to the country for him as part of a personnel exchange between Korea and Australia.

“After the investigation is concluded, one of the things I will be looking at is education, providing women with more education about what is right,” he said. “If we educate more about their entitlements to be free of this type of activity, this might liberate certain people.”

He said Australia already has one of the best systems available to protect people in vulnerable situations and that the committee will improve existing resources with its investigations and countermeasures.

And though the committee is initially focusing on prostitution among Korean women, Dominello insisted that in the end, the issue knows no ethnic boundaries.

“Regardless of where they come from, we try to find out a little bit more about it,” Dominello said, referring to the sexual exploitation of women in general.

He also said that while some might expect the issue to paint negative stereotypes of Koreans in Australia, this is not actually the case.

“I think people migrating from Korea are some of the best migrants we receive in our country,” he said. “Koreans are rightly proud of their wonderful culture, of their education system, of the contribution they make to the Australian way of life.”