Lee Soo-hyuk opens up about past love

Lee Soo-hyuk opens up about past love 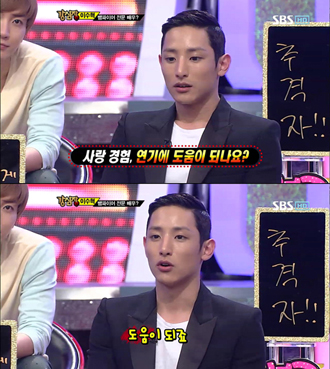 “Regardless of whether you are dating a celebrity or an ordinary person, every relationship experience helps you that much as an actor,” said Lee.
Meanwhile, the host of the show, comedian Shin Dong-yup advised the 24-year old model-turned-actor to keep dating for the sake of his career as an actor.

Lee starred in the drama “Vampire Idol” earlier this year and on the talk show, he confessed that he only took the role due to the convincing of his agency head.

Lee and actress Kim dated back in 2008 when Lee was relatively unknown. The two parted ways back in 2010 after two years together.