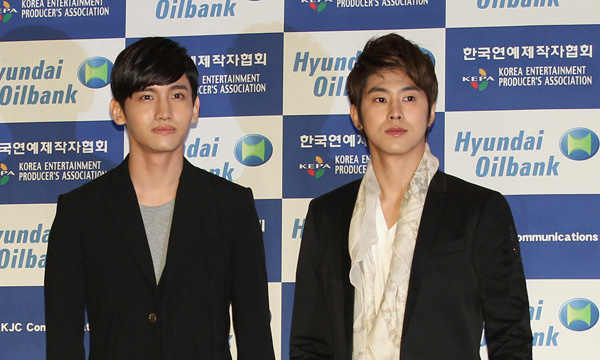 
Hallyu duo TVXQ, whose fame knows no bounds in Japan, has set out to entertain more than 100,000 Japanese fans on its fan meet tour.

The first fan meet and music event took place Saturday at Saitama Super Arena in Tokyo with more than 18,000 fans in attendance.

The eight-session tour will make its way around Japan and is set to become the biggest fan meet event ever in the country by a Hallyu group.

“The mission” was TVXQ’s first fan meet event in more than three and a half years, since the group reinvented itself after three original members left.

The “mission” themed event consisted of segments in which Changmin and Yunho faced various challenges.

Changmin tackled playing guitar and singing “More Than Words,” while Yunho attempted to cook a bowl of noodle salad.

Overall, a great time was had by all with the boys saying, “It’s such an honor to hold a fan club event at Satiama Super Arena and that’s all thanks to you.”