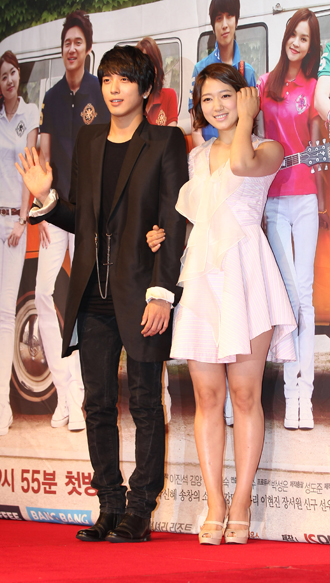 On-screen lovers from the drama “You’ve Fallen for Me” Jung Yong-hwa and Pak Shin-hye will visit Japan on July 16 for a fan meet for their drama.
The event to take place at Tokyo International Forum will be conducted like a talking session between the stars and their fans.

FNC Entertainment announced on July 11 that more than 10,000 fans will attend the event which was sold out as soon as the tickets went on sale on June 30.
A Japanese representative from the fan meet said that as well as entertaining fans on the day, the two co-stars will also donate part of the proceeds from the event to charity body dubbed Korea Food for the Hungry Organization.

The Korean drama that aired on MBC last year is Park and Jung’s second collaboration since working on “You’re Beautiful” back in 2009.
The duo’s second work is based on a love story that takes place on campus of an arts college.
By Carla Sunwoo [carlasunwoo@joongang.co.kr]