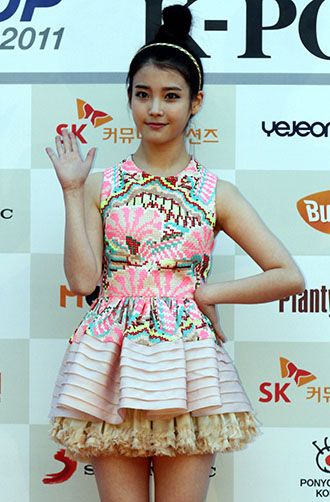 After wrapping up her encore concert, “Real Fantasy 2012,” over Sept. 22 to 23, IU told the audience of some 8,000 people that she would step up her role as the host of “Strongest Quiz Show” on MBC.

“I’ll take some time off and really concentrate on my hosting duty,” said the teenage singer at the venue, located in the War Memorial of Korea in Yongsan District, central Seoul.

The solemn vow came after a night full of amusements, ranging from renditions of IU’s hits as well as dance performances by the tiny K-pop princess to Michael Jackson and Britney Spears’ songs.
As no concert these days is complete without “Gangnam Style,” IU also took on Psy’s viral hit song.

The tour, which kicked off in June, made its way to Ulsan; Jeonju, North Jeolla; Suwon, Gyeonggi; Busan; Daegu; and Seoul.
The encore concerts were held to accommodate fans who missed out on tickets earlier.