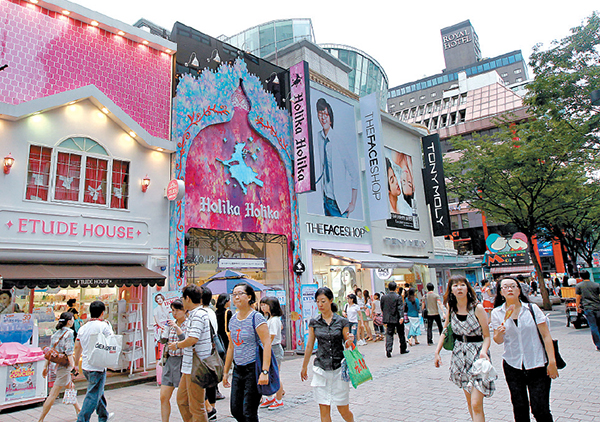 
With consumers increasingly seeking affordable luxury as the economy totters along, designer brands are rolling out more “masstige” brands that combine prestige with mass-market appeal.

This is the first time the monthly sales of a cosmetics brand at a single department store has exceeded 1 billion won, according to Lotte. Sulwhasoo also has high brand awareness overseas, especially in China.

LG Household & Health Care, which has nine cosmetics brands under its wing, is reinforcing the marketing strategies for Ohui and Fu, two of its leading masstige brands.

The company is also looking into ways to import foreign luxury cosmetics to enhance its luxury image.

Cheil Industries is moving to lure its VIP customers to Colombo, the Italian luxury fashion brand, after Cheil acquired it last November.

LG Fashion has also diversified its portfolio by strengthening its luxury business sector.

MaxMara, an Italian fashion brand that LG began importing in September last year, posted sales growth of more than 30 percent in the latest quarter, compared to the same period in 2011, despite the ongoing slowdown in consumption. 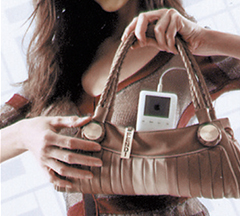 A model poses with an Apple iPod and a “masstige” Fendi bag at a fashion show as the luxury bag brand utilizes masstige marketing to respond to the consumer tend. By Lee Chae-min

It has succeeded in targeting consumers by focusing on its high-end image rather than by cutting its prices, LG said.

Foreign luxury brands also aim to expand the masstige products offered by their sub-brands such as Emporio Armani by Armani Exchange, Versus by Versace and Miu Miu, a sub-brand of Prada.

However, consumers are not blindly chasing cheaper products unless they meet certain standards of quality. This has led to surging sales of SPA, or fast fashion, brands, which get new trends quicker from the catwalk to store shelves at relatively high quality and lower cost.

The domestic market for SPA clothing brands such as 8Seconds, Who.A.U., Uniqlo, Zara and H&M shot up to 1.9 trillion won last year from 500 billion won in 2008.

Cheaper cosmetics shops such as Misha, Etude and Inisfree saw their collective sales grow to 2.5 trillion won last year, accounting for 28 percent of the total cosmetics market in the country.

“In the era of smart consumption, there is scant room for middle-priced products to stand. Unless the product is cheap, it must compete by differentiating itself in terms of other value,” said Shin Kyung-ja, director of consumer goods distribution at global consulting firm Bain and Company.

“We expect to see increasing polarization in terms of spending patterns among young consumers in their 20s and 30s - who have not yet experienced an era of particularly high growth - as they trend more towards expensive or cheap products depending on their financial situations,” said Shin.