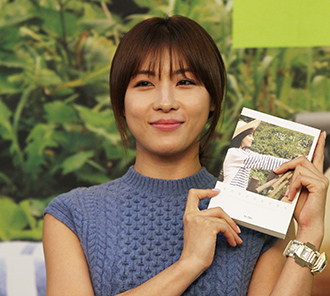 The renaissance woman’s memoir “This Moment” has become a best seller on various online book retailers, and to accommodate fan demands, Ha will spend the next three months holding signing events. The initial print run sold out within 10 days.

Ha will begin this Sunday with a meet-and-greet event at the Kyobo bookstore in Gwanghwamun, central Seoul.

The memoir took two years to complete. Ha squeezed writing sessions into her busy filming schedule. It’s said to be an uplifting work that carries a message of hope.

Meanwhile, Ha is also keeping busy filming a Joseon Dynasty version of “Charlie’s Angels,” which will open next year. Back in August, she also took part in launching a line of bags named after her under the Crocodile Lady brand.