‘Grandma bone soup’ is not what you think it is

‘Grandma bone soup’ is not what you think it is 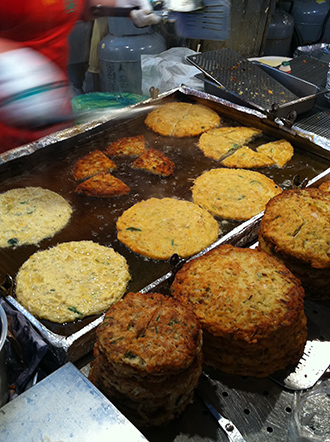 When I bragged to my friends from all over the world about some unique cafes in Korea, from wedding cafes to dog cafes, one of my friends half-jokingly asked me if a dog cafe is a restaurant that serves dog meat.

I showed him the photos of the dog cafe and we both laughed about the misunderstanding regarding the unique culture of Korea and the confusion over the words in the Korean language.

Korean vocabulary can be tricky, and the names of foods are no exception.

For instance, when gae means “dog,” what could gaetteok possibly mean? It is a rice cake made of mugworts with dough kneaded in a flat, round shape, and has nothing to do with dogs!

Some dishes may come as a culture shock until someone tells you the real ingredients. This article will explain some of Korea’s beloved foods, their origins and the little-known stories behind their names.

The origin of mandu, or dumplings, dates back to the Three Kingdoms period of China. Zhuge Liang, a chancellor of the state of Shu Han, tried to perform a ritual to calm strong winds near a river while leading an army to stabilize the region.

He was told that he needed a black cow, a white sheep and 49 men to be sacrificed at the altar for the ritual.

Zhuge Liang, instead, used flour dough and filled it with pork and lamb meat in the shape of human heads. After he performed the ritual with the fake heads, the troops were finally able to cross the river safely.

This meat-filled head is believed to be the origin of the contemporary dumpling. Regarding the name mandu, “man” means to deceive and “du” means a head in Chinese. Chinese dumplings were brought to Korea and became widely popular. Steamy mandu with quality meat and fresh vegetables are hard to resist.

With sohn mandu, the word “sohn” means a hand in Korean, but that does not mean Koreans are cannibals.

The signs at small mandu restaurants are informing patrons that their mandu is handmade and without artificial seasoning.

Koreans have long valued the concept of “hand tastes,” which can figuratively be translated into the taste of a mother’s hands. Korean moms used to use their bare hands when cooking whereas their counterparts in the West used spatulas, whisks or forks. When marinating bulgogi, Korean moms don’t wince at the thought of mixing the meat and soy sauce with their hands.

Cooking with bare hands means a little extra something in Korea. Hand-kneading can help the marinade seep into the meat more evenly.

Nowadays, plastic disposable gloves are common in kitchens for hygienic purposes, but a mother’s hands boost the taste as well as bring out the love for all of those enjoying the meal. 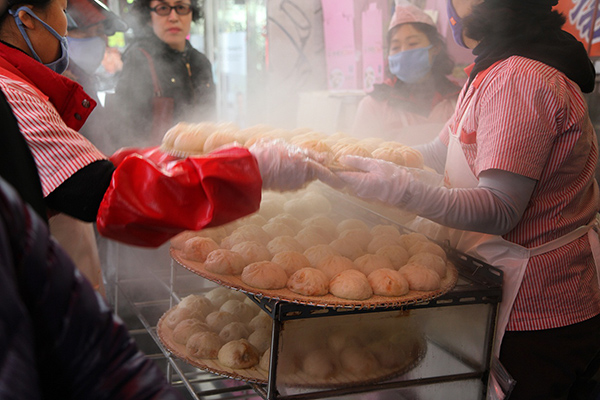 Sohn mandu can be translated into English as “handmade dumplings.” Provided by Michelle Kang

I certainly understand if you are dying for a proper explanation of the ingredients used in this quirky dish, but let me tell you about the haejangguk part first. Koreans love drinking and partying all night long, and they often drink into the wee hours of the morning.

To cure a hangover, many eat a soup that is usually made with bean sprouts and dried pollack fish. These ingredients are known to contain acetaldehyde that is said to protect the liver and reduce hangover symptoms. This special soup is called haejangguk and other ingredients such as congealed ox blood and pork spines or neck bones are also drinkers’ favorite ingredients for the soup. In one of the variations, bone haejangguk is a soup dish made with some vegetables and pork bones. Now you know that no grandmothers were used in the soup, but it’s rather a tasty, hearty soup cooked with a grandmother’s love.

Given the ingredients, this stew lies somewhere between Korean and Western food. It’s a feast of various ingredients, ranging from instant noodles and kimchi to Spam.

The dish originated in the post-Korean War era. The war left many men dead in the battlefield, and women and children were suffering from starvation. The South was garrisoned by U.S. troops and the U.S. Army bases overflowed with imported foods such as processed meat like sausages and ham while Koreans were malnourished.

Spam and sausages were brought out of the U.S. military for Koreans, who began enjoying the ingredients “Korean style” by adding kimchi and hot pepper paste.

The streets around the U.S. base in Uijeongbu were quickly lined with restaurants selling this spicy stew, and it was named budae jjigae, meaning “army base stew.”

It was also called Johnson Soup, and there are two theories about the nickname: one is that it was named after then-President Lyndon Baines Johnson, and the other is that Johnson was one of the most common names in America during that time. Whichever is correct, this multicultural dish is derived from a tragic history, but is nonetheless delicious.

Also called jeon or buchimgae, bindaetteok is a Korean pancake commonly made of ground mung beans. For toppings, a wide variety of ingredients are added, including vegetables like bracken ferns or bean sprouts and ground pork and seafood, such as squid and oysters.

This crispy yet soft Korean-style pancake is a major hit. It seems to satisfy foreign taste buds as well even though the meaning of bindae is rather shocking: bedbug.

Bindaetteok is as flat as a bedbug, but there are other reasons the food has gotten the name. It was the dish that used to be placed under a pile of meat on the table for ritual ceremonies.

During the Joseon era, one rich family used to make a lot of bindaetteok in the lean years to give out to the poor who swarmed to Sungnyemun (present day Namdaemun) looking for food. In honor of the family’s benevolent deed, the pancake was called binja tteok, meaning food for the poor, and it later became bindaetteok.

The names of some Korean foods have words with a variety of meanings, but don’t be intimidated if a translation comes out in a surprising way! Don’t let strange-sounding names dissuade your appetite, and keep exploring new foods that will spice up your taste buds. “Bone” appetit!