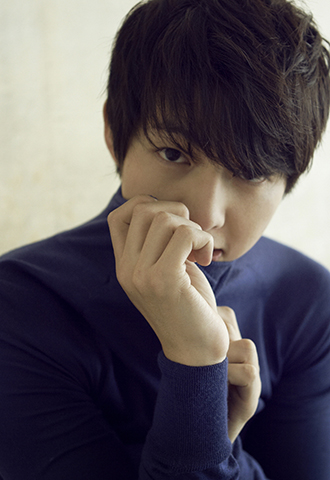 Song Joong-ki has shot to success in 2012 on the strength of “The Innocent Man” TV series and the wildly popular “A Werewolf Boy.” Provided by SidusHQ

By now, who hasn’t heard of Song Joong-ki?

The 27-year-old phenomenon is well on his way to becoming the Psy of Korea’s TV and film industries.

It seems like Song is everywhere. KBS’s hit drama “The Innocent Man,” which ended last week, was Song’s first leading role. The show was consistently first place among viewers in its time slot.

Then on Sunday, it was reported that Song’s movie, “A Werewolf Boy,” that was released only three weeks ago, surpassed the five million mark at the box office, a million more than “Architecture 101.” That made “Werewolf Boy” Korea’s most-watched melodrama movie ever.

The day after the final episode of “The Innocent Man” aired, the JoongAng Ilbo met up with Song.

When asked if he was aware of his massive popularity, he responded, “Am I really that popular? I really don’t know if I am.”

He added that although he is embarrassed to say so, he believes his “milk-like” fresh and youthful image has definitely helped him. “But in real life, I’m different. I’m a bit prickly, but also have a lot of affection,” he said.

Song’s sudden rise to fame sets him apart from many other top Hallyu stars. Actors often gain popularity because of their cold-hearted yet cool characters, such as Hyun Bin in “Secret Garden” as the arrogant CEO and Bae Yong-joon as the heart-throb in “Winter Sonata.”

Yet, for Song, his character of Kang Ma-ru is considered “too much of a nice guy” and hard to find in real life.

As Song’s popularity rose, viewers hoped for a happy ending to “The Innocent Man.” This opinion was directly expressed to the show’s writer, Lee Gyung-hee, who is known to have her leading actors die in the final episode. So Ji-sub in “I’m Sorry, I Love You” and Rain in “A Love to Kill” come to mind.

Luckily for Song’s fans, the drama presented a happy ending.

“I first thought that from Lee’s previous works, there was a high chance of a sad ending,” he says. “If it was a movie, a sad ending might have been nice too, but since it was a drama and dedicated to the audience, I’m satisfied with a happy ending as well.”

As for “A Werewolf Boy,” it is a fantasy romance between a teenage girl and a feral boy. The plot of the movie is not particularly fresh and Song barely enunciates any words in the movie, yet he successfully managed to touch the audience with his delicate facial expressions and true werewolf-like body language and manner.

The fantasy romance could have become just another run-of-the-mill melodrama, but the film’s smashing success is a testament to his ability to take a familiar character and make it his own.

What really gave rise to Song’s popularity is his rendering of a “pure first love” image, something the two productions have in common. In “The Innocent Man,” Song covers up his first love’s murder; in “A Werewolf Boy,” he falls in love with the first and only person to have ever treated him with affection.

Throughout the next few decades, Song’s werewolf boy did not forget his love, and the ending scene where the former teenage girl reunites with Song is picked as a favorite scene for middle-aged audiences.

Song also agrees that the symbol of “first love” is powerful. “Men can’t easily forget about their first love. I watched ‘Architecture 101’ [a story based on first love] four to five times. Even in ‘The Innocent Man,’ I had a great fondness for my character’s first love,” Song says.

Another reason for Song’s appeal lies in the masculinity behind his fresh and lively image on the Seoul Milk television commercial. The actor proved that he can fully display contrasting personalities, warm-hearted and cold-blooded, pure and provocative.

In “The Innocent Man,” his low-pitched voice and charismatic performance is testament to how he can balance both sides of his character.

“Kang Ma-ru is a character who doesn’t show his true emotions and narrating him was the only way to do it. I focused a lot on my acting voice, and when it sounded bad, we recorded several times,” he says.

Throughout shooting the drama, Song confessed that there were times when he was not in control of his emotions.

“In dramas written by Lee, the characters are intense, and I was worried I couldn’t play the part well. I wanted to portray Kang Ma-ru so perfectly that I was not able to separate myself from the character, even when shooting was over.”

The actor also admitted that he was overwhelmed with emotions when he heard that “A Werewolf Boy” has become a box-office mega hit. “I realized I was checking how many tickets the movie was selling,” he says “But later, I thought there was something wrong and I tried to focus on my Kang Ma-ru character again.”

It has been five years since Song’s acting debut. “I still have a long way to go. I don’t have enough experience to give a scene any structure or balance. So I try to choose the best script.”

With his handsome features and a diploma from a prestigious university, Song has become known as “Korea’s DiCaprio.”

“I have really liked [Leonardo] DiCaprio since I was young. So I do want to follow his acting career. But I also really want to become an actor like Han Suk-gyu,” Song says. “I think popularity is something to be thankful for, but it can also make an actor delude himself. I’m doing my best not to become too haughty.”