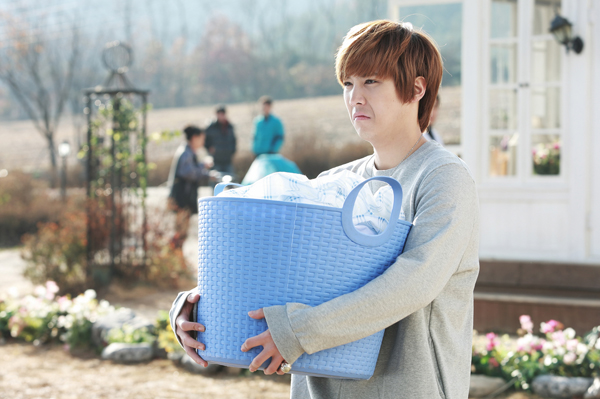 Lee Hong-ki from F.T. Island plays a bratty idol singer who learns a lesson on life through mandatory community service at a hospice. Provided by The Holic Company

If there is one role that Lee Hong-ki from idol group F.T. Island can play to perfection, it’s, well, being an idol singer.

As the front man of one of the only K-pop groups to play their own instruments, Lee has proven himself not just as a singer but as a star on the small screen.

So it wasn’t all that surprising to see Lee land his first lead in a film, “Knocking on Heaven’s Door.”

What’s more, much like the hit TV drama “You’re Beautiful,” which proved Lee’s prowess as a TV star in 2009, Lee takes on the role of an idol singer in the film. Or as the 23-year-old would say, “Korea’s No. 1 idol singer.” The major difference from the 2009 comedy that catapulted Lee onto the Hallyu scene is the setting: a hospice where patients of all ages learn to cope with their impending demise.

At a press event earlier in the week, Lee, his co-stars and director Nam Taek-soo talked about looking at the lighter side of death.

On playing a snooty A-lister, Lee said it wasn’t that hard to improvise.

“I must admit I do complain a lot and am very vocal, so that was easy to act,” he said.

And although Lee admitted that his acting was far from perfect, he said he felt the pressure, owing to his background.

“Because I come from a child-actor background, they do expect more,” said the singer, who emphasized that up against other newbie singers, his acting was “nothing exceptional.”

But despite Lee’s humble front, Nam said that he couldn’t think of anyone better suited for the role of a superstar who learns about life through volunteering at a hospice.

“When I first read the scenario I said no because I’ve never come across a hospice before and didn’t think I could take part in something I knew nothing about,” said Lee, before explaining how he changed his mind. “Although I lacked experience, I thought it’d be a turning point in my life to take part.”

And it wasn’t just Lee who believed his life would never be the same after the film that is based on the notion of death.

Baek Jin-hee, 23, who plays Lee’s supervisor at the hospice - not to mention patient, band member and a love interest - said that the movie was a time to reflect on the bigger picture.

“I thought that people went there to wrap up their lives, but when I went there, I realized how much the patients wanted to live.”

Shim Yi-young, who plays a mom who keeps her terminal illness a secret from her young son, said that the movie wasn’t exactly as dark as she thought it would be.

“At first I thought it’d be a serious, gloomy movie, but I learned that death was kind of a new hope for some,” she said.

Ma Dong-suk and Lim Won-hee, who play two residents with a volatile relationship, said that balancing comedy while dealing with such a serious matter was a difficult task.

All the actors except Lee visited hospice facilities to prepare for filming.

“The director told me not to come to the hospice and said I was to just look to other actors for guidance,” Lee explained.

And while the concept of a sanitarium may be taboo to the Korean public, Nam said that was what sparked his interest in the project.

“I met a 20-something woman who was dying at a hospice,” explained the filmmaker. “[But] films like ‘Life is Beautiful’ showed that beauty could be found in a horrific place like Auschwitz.”

And although he’s not sure how the public will take to making light of imminent death, Nam said that he was happy with the outcome “not because it’s a great film but because of the actors and the staff. We made something great.”

And as Lee’s fans wait patiently for opening day of the movie that will mark Lee’s debut as a lead, the singer said that he has some bigger ideas for his acting portfolio.

“I want to try playing a character that is as far away from my job as possible,” he said. “I’ve said before that I wanted to play the devil, you know like the devil character from ‘Death Note’ or ‘Dracula.’ I wish they were real because I want to know what it’s like being bitten.”