Dreams can have many meanings

Dreams can have many meanings 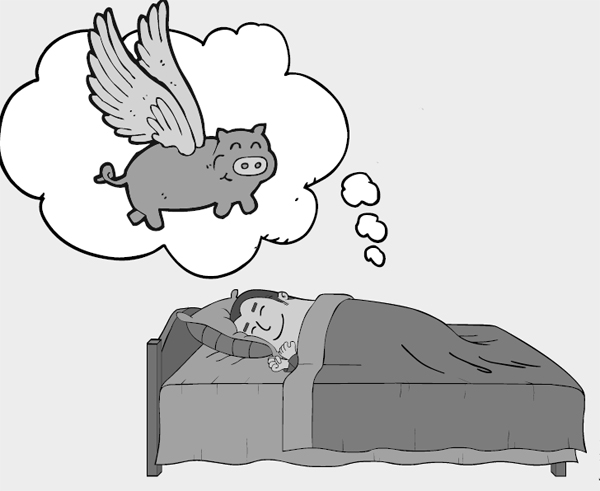 Keep dreaming until you see a flying pig.

You’ll win the lottery when pigs fly ? in your dreams.

When is the time to buy a lottery ticket or prepare for a baby shower gift?

Last month, the surprising news that there were 30 winning tickets in a lottery drawing was the talk of the town for a while. Even more astounding is that one individual bought 10 tickets with the same winning numbers! Most of us faced rampant jealousy of the lucky lotto player hitting the jackpot, while some speculated whether the ticket-holder had forged the tickets or somehow gamed the system. It turned out that it was not fraud, and some chit-chat around the water cooler with my co-workers dismissed that idea, with everyone hoping they can have a ‘good’ dream to win the lottery. What kind of dream is auspicious and is there a specific lucky dream that could enable you to win?

People’s dreams are interpreted in many ways depending on the objects or images therein. We are not Freudian (sometimes a cigar is just a cigar) but this article will help you obtain a better understanding about Korean culture, as it’s often believed that dreams contain prophetic meanings.

Even if some people have never bought a lottery ticket before, they might have a compulsive desire to take a step toward a lottery ticket kiosk if they dreamt of a pig the night before. Dreaming of a pig is interpreted as being extremely fortunate as the animal is the symbol of good luck, wealth, and fortune in Korean culture. It may be related to the fact that the Chinese character for “pig” is pronounced “don,” which means money in Korean.

Nonetheless, most ancient documents analyzing dreams state that pig dreams mean wealth, good luck, a new job or promotion at work, a win or honor. As the pig has long been regarded as a lucky animal, the custom of paying respect to ancestors by performing a ritualistic service with the head of a pig on the table is still performed in Korea. That’s why people become excited after they dream of holding a pig in their arms or chasing after a pig as big as a cow and catching it.

After a pig, the next thing you’d want to see in your dream is your ancestors or a leader of the country - a king or deceased president, for example. If your dead grandfather or a former president appears in your dream, it is believed that your chances of becoming lucky are high. Some lottery winners have confessed that they bought tickets after they had a dream of their grandparents. But seeing just any ancestor doesn’t guarantee you’ll become rich.

An ancestor who is in a bright and cheerful mood and giving you a good piece of advice or a precious gift is definitely a good sign, but one with a gloomy face, or who is scolding your poor manners means the opposite. One wrestler who won a gold medal at the Olympics claimed that he had dreamt of his father giving him a white bag, while another lotto player won a car after she dreamt of her dead mother-in-law giving her a flower.

It sounds gross, but excrement is also a good luck charm in the world of dreams. Hence a dream of yourself in a traditional bathroom with a squat toilet where you can overlook pigs rooting below your feet is the best dream. It may be powerful enough to guarantee you a win in the lottery.

If a married woman says that she had a dream of a sleek, shimmery snake slithering into her arms or she received a big, fresh peach from a stranger as a gift, don’t spare a moment to congratulate her - she will soon be expecting a baby.

There are certain dreams believed to foretell conception. It is usually mothers-to-be who dream about their own conception, but sometimes their family or best friends have pregnancy dreams for them. What makes conception dreams different from regular ones is the subject of the dream and unusual circumstances. Mothers-to-be say that the conception dream feels so intense and realistic that you’ll never forget it. If the object they dream of is large and vivid in color, but few in quantity, it is more likely to be a good omen. For instance, a large, shiny apple, or a fat, glossy chestnut means a baby.

A baby’s gender is also believed to be predicted by dreams. Flowers, fruit, and jewels symbolize a girl, while dreams featuring tigers, snakes, pigs or carp mean that a baby boy is on the way. Due to their appearance, peppers represent a son as well. Believe it or not, some of the great men in Korean history were born after an auspicious conception dream. Shin Saimdang, who graces the 50,000 won banknote, gave birth to Yi Yulgok, one of the most prominent Confucian scholars of the Joseon Dynasty, after the artist and poet dreamt of a black dragon soaring from the ocean into her bedroom.

Other objects considered good omens include fire, crystal-clear water, excrement and a pool of blood. Some other dreams are regarded as more superstitious. If children dream of jumping off a cliff or falling from the sky, the parents assure them it means they will grow a few inches taller. If someone has a strange or unusual dream that doesn’t seem to belong to any of the accepted categories, people do not give it too much meaning or dismiss it entirely, calling it a ‘dog’ dream, which means a silly dream with no relevance.

Place a pen and pad of paper on your bedside table so that you can record your dreams. If you see a squealing pig, a beloved departed grandparent, or a national hero, you should probably try your luck with a lottery ticket. If it’s snakes, peaches and apples you dream of, either start painting the nursery or thinking about buying baby presents. Sweet dreams!