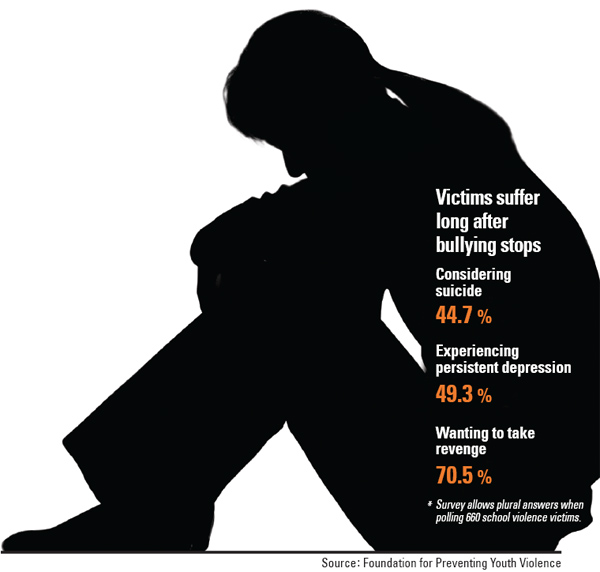 A 43-year old mother surnamed Lim couldn’t contain her resentment when she learned that a bully who broke bones in her son’s face was only ordered to volunteer at the school for three days and send him an apology letter.

The bully’s parents refused to cover the medical expenses for the injured boy, saying that they didn’t want to pay because the family reported the violence to the police.

Lim went to the middle school’s committee on school violence for help but it did little but slap the perpetrator on the wrist by putting them in separate classes.

After the mild punishment, the bully took revenge on the 15-year-old by locking him in an empty class room and relentlessly beating him.

“During the two years we sought help both from the police and the school, my son felt constantly threatened. I felt that the violence prevention centers and schools didn’t put the protection of the victim first, but just mindlessly imposed a lenient punishment so they could say they did something,” Lim said.

According to a survey by the Foundation for Preventing Youth Violence, 49.3 percent of those bullied from elementary to high school said they feel depressed and frustrated even after the school handles the matter.

According to the survey, the most popular way of handling a school bully is to require the disorderly student to write an apology letter, with 7,820 out of 16,021 cases nationwide settled that way, followed by compulsory voluntary service inside the school in 7,798 cases.

Corrective measures deemed as strict, such as transfer or expulsion, account for less than 20 percent.

“There is a readily available format for such letters and they just mindlessly fill out their name and signature that they won’t beat another student again,” said a 43-year-old mother surnamed Yoo, whose daughter was assaulted by a group of bullies from a different school.

Under Korean law, bullied students can demand their school cover their medical expenses, but schools are often reluctant to pay.

“When my daughter and I sought medical compensation from the school, they requested the personal information of the wrongdoer,” said Yoo.

“But when I contacted the bullies’ school, they didn’t allow me to have the personal information, citing privacy,” she said adding that she ended up paying all the expenses.

Schools often opt to hush up the cases to protect their reputation.

“School staff and principals just try to cover up the controversial violation cases, worrying about the image of the school,” said Shin Soon-gab, president of the Seoul Media Center for Adolescents, a Seoul-city-government-run organization affiliated with the Foundation for Preventing Youth Violence.

“Depending on the region, some schools even require the approval of the school’s principal [for compensation for medical expenses] which is not stipulated under the law. Sometimes the schools attempt to hide the fact that the victims are entitled to compensation,” the president said.

The violence prevention centers and schools often put victims and bullies together when the institutions administer measures to cope with violent incidents.

But the parents of the at-risk students said this further traumatizes the victims.

“For those who are threatened and beaten by the bullies, just being near them causes great fear and emotional instability,” said Cho Jeong-sil, the president of the Association of School Violence Victims.

“We desperately need a process where they are treated separately,” the president said.

Government-run counseling centers dedicated to helping students get over the emotional pain also invite both parties.

Wee Counseling Centers across Seoul, operated by the Korea Educational Development Institute, is one example.

“I didn’t want to take my kid to the Wee center because we knew that we would encounter the boys who bullied and traumatized him,” said Lim.

The regional branches of the government-sponsored institution even lack counseling experts. Of the five centers across Seoul, only one branch has an expert available upon request while the remaining four centers don’t have in-house counselors.

An official from the Ministry of Education admitted that the government fails to properly help the victims recuperate.