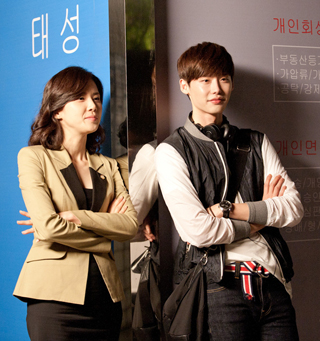 Lee Bo-young, left, plays the materialistic public defender, Hye-sung, and Lee Jong-seok plays the boy, Su-ha, who tries to protect her from a spiteful killer in the SBS TV series “I Hear Your Voice.” [JoongAng Ilbo]

A boy that reads other people’s minds and a materialistic public defender in the ongoing SBS drama “I Hear Your Voice” are among the most popular combination of characters in TV dramas recently.

Lee Bo-young, star of the KBS drama “My Daughter Seo Young,” plays the materialistic public defender Hye-sung, who testified in favor of a boy with supernatural abilities 10 years ago after she witnessed the boy’s father being murdered.

Actor Lee Jong-seok from the SBS drama “Secret Garden” plays the boy, Su-ha, who tries to protect the lawyer from a spiteful killer played by actor Jung Woong-in from the KBS drama “Ojakgyo Brothers.” Jung is determined to take revenge on the lawyer, who made him serve jail time.

The drama is popular because it doesn’t fit in any particular genre.

It encompasses a fantasy element with a boy with supernatural abilities, a thriller with a killer bent on taking revenge and also a romantic element, as Jong-seok grows amorous feelings towards Bo-young.

“It is hard to tell what genre the drama falls into after just watching the first episode,” said Yim Young-ho, communications professor at Pusan National University.

“It is a good example of combining different genres by taking the elements that can help raise the viewership rate.”

Also, the drama has employed the popular format used in sitcoms in which every episode has a conflict between the characters, followed by a resolution. Writer Park Hye-ryeon has experience in writing scripts for sitcoms as well.

“As more sitcom writers move to soap opera, Korean dramas, especially the legal or investigative ones, are being reformatted,” said Kim Ju-ok, a Ph.D. student at Temple University in Philadelphia.

Along with a storyline that gives tension and relief in every episode, the two main characters contribute in other entertaining elements.

Critics say that Lee Bo-young has managed to absorb the mischievous character, leaving behind her stereotypical image, which was too calm and tidy. Her stubborn and argumentative personality brings attention to her voice.

“Lee Bo-young is the exemplary case of an actress who has a good voice who will eventually succeed in TV programs, as TV is also an audio device,” said Kim.

Lee Jong-seok, who plays high schooler Su-ha, seems to be on the border of a boy becoming a man. Such a pure but masculine combination attracts female audiences as he tells his first love, Hye-sung, that he will protect her from now on.

“The mysterious boy with supernatural abilities fits perfectly for him,” said professor Kim Young-chan of Hankuk University of Foreign Studies.

However, some of the experts pointed out that the drama should have considered more about child violence, as in the beginning 8-year-old Suha witnessed his father being beaten to death after he was hit by a car.

“Such a scene could never be aired in TV channels in Europe, where people are very sensitive about child violence,” said Hong Seok-kyung, journalism professor at Seoul National University.

“Although such a scene was necessary to have a strong storyline, it is too direct and strong a video expression which did not consider children who will be watching the show from their own point of view.”

Another expert pointed out that Korea should implement some guidelines to regulate scenes that involve child actors.

“It is an important matter what scenes young actors can play and Korea should have a production guideline, just like United Kingdom’s channel BBC has,” said researching faculty Kim Su-ah at Seoul National University.