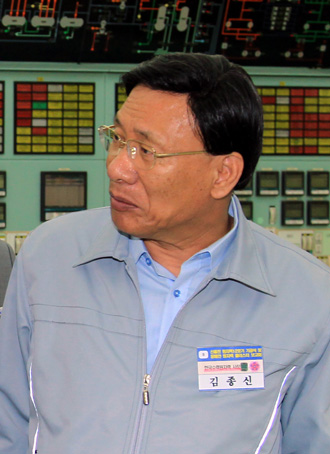 Prosecutors investigating corruption in the supplying of parts to Korea’s nuclear energy reactors arrested Kim Jong-shin, former president of the state-run Korea Hydro and Nuclear Power Corporation, at his house in Seoul on Thursday night for allegedly taking bribes from nuclear industry companies in return for business favors.

The prosecutors reportedly found links to Kim taking bribes in e-mails he exchanged from 2008 with nuclear reactor officials. The prosecutors also reportedly obtained testimony from the president of a supply company that he had bribed the former president for influence peddling.

Kim reportedly pocketed kickbacks amounting to more than 100 million won ($87,546), according to prosecutors.

At a time of the arrest, the prosecutors also conducted a search and seizure at Kim’s house to gather evidence on his alleged charge, confiscating computer disks and documents.

“The investigation into Kim’s case is not related to JS Cable, which provided faulty cables to Shin Wolsong 1 and 2 reactors and Singori 1 to 4 reactors from 2008 to 2011,” said a prosecutor involved in the investigation, speaking on the condition of anonymity.

The Busan District Prosecutors’ Office, however, is not ruling out the possibility that Kim was involved in the fabricated test results scandal as he was at the helm of the nuclear power corporation when the fabrication of such documents and supplies of faulty parts took place.

“As the president of the nuclear power corporation, one has decisive authority over the selection of supplier,” said the prosecutor. “We are looking into whether there was more corruption related to parts supply.”

The JoongAng Ilbo reported that the prosecutors pressed Kim about whether or not he was aware of the illegal actions of his subordinate at the power corporation, surnamed Song, who has been indicted for ordering managers at parts suppliers to fabricate cable test results in January 2008, but did nothing about it.

With the arrest of the renowned nuclear expert, the investigation into the rampant nuclear-industry corruption is expected to reach to the top echelon of the state-run nuclear power corporation, which makes orders for nuclear reactor parts.

Following the formation of a special investigation team at the Busan prosecutors’ office on May 30, a total of 11 people in the nuclear power industry, including officials at the nuclear power corporation, have been put behind bars.

As of Friday, nine of the country’s 23 nuclear reactors have been suspended from operation, raising worries over a possible blackout amid a high energy-demanding season.

The arrest of the 68-year-old Kim came as a shock to people in the nuclear industry because of his high status in the industry.

A graduate of Seoul National University with a major in mechanical engineering, Kim supervised the construction of the country’s first Gori nuclear reactor plant for six years.

In 1995, Kim also took the lead in developing the Korean Standard Nuclear Power Plant and has an extensive personal network in the global nuclear industry.