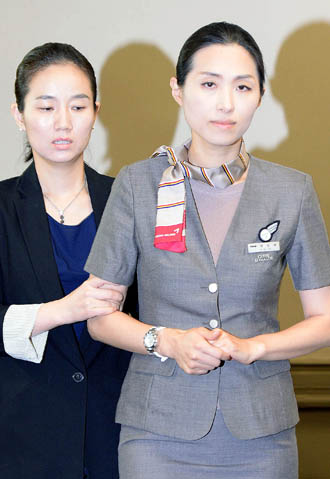 Lee Yoon-hye, right, the cabin manager of Asiana Airlines’ flight that crashed at San Francisco International Airport, enters the press conference room at Holiday Inn Civic Center in San Francisco on Sunday. Lee was the last person to escape from the aircraft after evacuating passengers, despite injuring her pelvis. [NEWSIS]

Flight attendants from Asiana Airlines have been praised as heroes after passengers on the flight that crashed said their rescue efforts prevented more casualties.

According to the airline and media reports, Asiana cabin crews helped prevent further casualties. The company said that there were 12 flight attendants - 10 Korean and two Thai - on the flight and they worked to evacuate passengers until the last moment.

According to Asiana, seven out of the 12 flight attendants were knocked unconscious after the hard landing, but the five attendants who were mostly on the left side of the aircraft conducted a rescue drill, such as opening emergency exits, deploying the inflatable slides and guiding passengers to the emergency exits.

According to the airline, the five crewmembers were the last members to leave the plane, after working with able-bodied passengers to evacuate nearly 300 passengers and then rescuing the seven who were knocked out.

Their heroic effort was applauded by passengers and online commentators all over the world, as a lot of supporting messages were posted on Web portals and social networking services.

“There’s no question that the cabin crew on Asiana 214 performed extremely well in evacuating passengers. Credit to them,” Nicholas Augusta wrote on his Twitter account.

Passengers and officials at the crash scene are also taking their hats off to the cabin crew.

Eugene Anthony Rah, a 46-year-old U.S. citizen who was one of the passengers aboard the doomed flight, said in an interview with the Wall Street Journal that he couldn’t forget the rescue effort of Kim Ji-youn, who was busy helping injured passengers “carrying people piggyback” with tears streaming down her face. He praised Kim as a hero.

According to Rah and Asiana, Kim carried a child on her back and ran more than 500 meters (547 yards) to safety. Kim, 30, received her latest emergency evacuation training on June 26. She joined the air carrier in 2007, and won a service award from the company in 2010, according to the company.

Lee Yoon-hye, the 40-year-old cabin manager on the flight was recognized by San Francisco Fire Department chief Joanne Hayes-White for her bravery, according to local media reports. The chief said she made sure everyone got off the plane and that she was the last one to evacuate.

According to Asiana, Lee had more than 18 years of experience and is one of the best flight attendants in the company, also serving on the presidential airplane from 2000 to 2003.

Lee, who has been recognized 14 times by the company, told reporters yesterday she had a very clear vision of how to react when the accident happened.

“As we trained every year, it became clear when the situation happened,” Lee said. “When the fire occurred, I just thought about extinguishing the fire, never thinking it would be dangerous.”

Lee injured her pelvis during the hard landing, but said she didn’t notice the injury until she got to the hospital. Lee said that one of the slides actually inflated inside the cabin, which trapped one of the crewmembers, but she managed to free her at the last moment.

The company’s educational program for emergency evacuation is conducted under standards of the IATA Operational Safety Audit and also carried out after getting approval from the Ministry of Land, Infrastructure and Transport.

Among the 28 programs, the emergency evacuation program is considered the most important for cabin crews as it is directly related to passengers’ safety, the company said. All cabin crew for Asiana are required to pass 14.5 hours of training every 12 months.