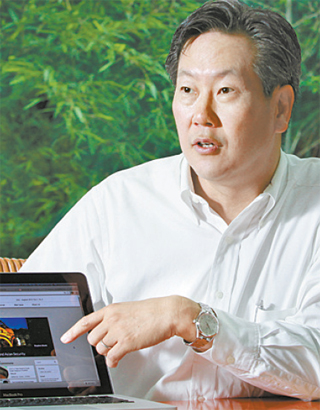 The Asan Institute for Policy Studies said it is launching the first Korean foreign policy and security web journal in English today, the Asan Forum, to bring speedy but in-depth understanding of both domestic and international debates to a new generation of a “concerned educated public.”

“Foreign policy, as you know, is not just determined by experts and policy makers but is the result of ongoing domestic debates, politics and social changes,” said Asan President Hahm Chai-bong in an interview with the Korea JoongAng Daily at the institute in Jongno District, central Seoul.

With Northeast Asia becoming more of a focus in international affairs, key topics covered in its first edition of the Asan Forum are the South Korea-United States alliance, which celebrates its 60th anniversary this year, President Xi Jinping’s “China Dream” and Japanese Prime Minister Shinzo Abe’s summit in Russia.

“Most big name journals are Western-focused,” Hahm said in regards to English-language international affairs and national security publications. “There are many Asian scholars whose native language is not English,” he added. “We want to give a voice to these scholars.”

The Asan Forum will be published in English. Hahm, who became president of the 5-year-old foreign policy think tank in 2010, admitted the process of starting an online journal was longer than he expected.

“We didn’t want to replicate what others were doing,” he said. “There are many foreign policy and national security/international affairs journals both in Korea and outside. We needed to find the right balance or compromise between depth and speed and use the Internet to appeal to a generation that will otherwise not be exposed to these kinds of debates or issues because they don’t conform to the speedy way in which they think and interact with the outside world.”

One major idea was to keep articles shorter than in print journals. The Asan Forum will publish regional and international reports. It will have monthly features plus special commentaries and country reports. For the country reports, an expert on each nation will give an overview of the most timely debates in China, Russia, Japan and Korea.

The editorial board, said Hahm, features experts in the Northeast Asia region. Gilbert Rozman, a sociology professor at Princeton University who speaks Chinese, Japanese, Russian and Korean, came on board as editor-in-chief after formally retiring from teaching this year. He deemed the journal a “worthy project for the next stage in life,” according to Hahm, who has co-authored books and fostered a long-time friendship with the professor.

Hahm said the hottest policy issue of the time depends on one’s perspective. “As a Korean, it’s the North Korean nuclear issue. As an East-Asian, I would have to say the rising rivalry, rising national sentiment within Asia, is a deep concern.” From a broader perspective, the future relations between China and the U.S. have serious bearings not on just South Korea but the region as a whole.”

The journal can be found online starting today at www.theasanforum.org.