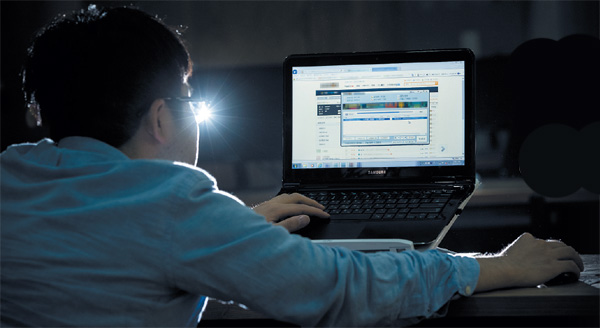 A webhard we will call P - a pseudonym - is one of the top five remote storage sites in Korea that allow users to download content, for a price.

One click on the adult content category gives you a selection of 69,440 files to choose from. Taking into account that some posts have been deleted, around 40,000 adult-content files are available.

Webhards are the new, go-to places on the Internet for Koreans with little regard for intellectual property rights. The technology is much simpler than peer-to-peer or other file sharing protocols like BitTorrent. They’re basically big hard disks in the cloud with goodies - largely illegal goodies.

Webhard.net, owned by LG U+, promotes itself as a businesslike remote storage site where you can upload work projects and have them accessed by other members of your team for a monthly fee. In Korea, all remote file hosting services are now called webhards, which stands for Web hard-drive.

On webhard P, you can watch a movie playing in the local multiplex for just 122 won. P charges ten won per 10MB of downloading. 1,000 won is enough to download an hour’s worth of pornographic videos (1 gigabyte).

The webhard receives most of the money paid for downloads. But people who upload files get points for every download of that file, which they can redeem for cash or for their own downloads.

Security procedures to register for membership on a webhard are relatively lax compared to other Korean Web sites. For example, P does not ask for a resident registration number or other personal details. With the citing of a single e-mail address, the entire site is open to a user. The result is that even if illegal content like pirated films or pornoraphy is discovered by authorities, it is very hard to trace who uploaded them. Especially if the uploader uses an e-mail address set up for the purpose.

Between April and May, the Cyber Terror Response center at the National Police Agency found that 75 percent of pornographic materials accessed online had been uploaded through webhards.

The JoongAng Ilbo has cooperated with the Copyright Protection Center to jointly investigate 201,685 posts uploaded on webhard P between April 10 and 15. The JoongAng Ilbo found that 31.5 percent of posts were copyrighted content. It estimated losses to copyright holders of these files to be 2.44 billion won.

On webhard P, the movie category is the largest. Out of 36,500 movie files, 38.3 percent were duplicates of copyright-protected films while 29.3 percent of the broadcasting content, such as variety shows or dramas aired by major TV stations, were illegal files.

But the biggest losers from illegal downloads from webhards are software companies, usually those that make programs that run on the Windows operating system. Although the total number of software uploaded on webhard P numbered only 296 (0.1 percent), software costs on average of 100,000 won per product, far more than a movie or TV show. Software companies’ total losses were estimated at 1.05 billion won.

Although the Copyright Protection Center has used a tracking system since 2009 to try to protect copyright holders, losses to pirates are on the rise every year. Last year’s losses to all concerned copyright holders were estimated at 2 trillion won by the protection center.

The domestic market size of webhards is estimated to be around 1.8 trillion won in revenues.

At present, 113 companies have registered with the Korea Communications Commission following the introduction of a webhard registration system in May 2012. But just two Websites, Bobopail and now, have been confirmed clean by the Copyright Protection Center.

Many uploaders of illegal content are thought to be in their 20s-40s. The forensics team at the Korea Copyrights Commission have found among the top 20 uploaders operating on four major webhards in Korea, over half of them were in their 30s (55 percent), followed by people in their 40s (21 percent), 20s (14 percent), and 50s (10 percent). No teens have been identified as heavy uploaders.

Some illegal uploaders are regular company employees or housewives looking for a little income on the side.

“Webbonjwa” - a combination of Web and Bonjwa, which can roughly be translated as maestro - has become an honorific for people who professionally upload unauthorized content on a massive scale. Since 2011, one Webbonjwa surnamed Kim uploaded 13,719 unauthorized files, including 5,861 movies and soap opera videos. The rest were largely Japanese pornography. Such profligate uploading has made the 36 year-old company employee an online star in South Korea. His real name not known.

Kim has also been responsible for uploading Hollywood films that were not yet released in South Korea. People could download those films for an average of 100-200 won per file.

Another Webbonjwa surnamed Park, who works at a smartphone development company in Suwon, Gyeonggi, used to earn 2 million won per month uploading files. In February 2012 he started a webhard of his own. In May, the 30 year-old was indicted without detention on charges of disseminating pornographic materials.

Youths may not be heavy uploaders, but they’re still involved. In March 2012, the Busan Haeundae Police Precinct rounded up 114 online users who uploaded 3,420 files of pornographic material. Among the 114, 16 were middle and high school students.

“We started uploading pornography to save the cost of downloading files from webhards,” one of the busted minors told the police.

“It usually starts with a person with not a very high income who starts uploading one or two illegal files to save costs of downloading,” said Jeon Jin-deok, a detective from the Special Judicial Police at the Ministry of Culture, Sports, and Tourism. “Some of them develop into heavy uploaders.”

In January last year, a habitual uploader surnamed Kim received a message from the owner of webhard S - also a pseudonym - asking him to upload pirated copies of movie files. Between November 2011 and January 2012, the 33 year-old Kim had been convicted of copyright infringement three times and paid 600,000 won in fines.

Kim tried to beg off but the owner promised to give him two untraceable IDs and a hefty cash payment. In the next three months, Kim uploaded 497 foreign film files on webhard S and made 2.98 million won.

The penalty for illegal uploading is from 500,000 to 1 million won. Im Sang-hyuk, an attorney at the law firm Shin & Kim says that in the U.S., damages for copyright infringement are much higher and can go up to $1 million.