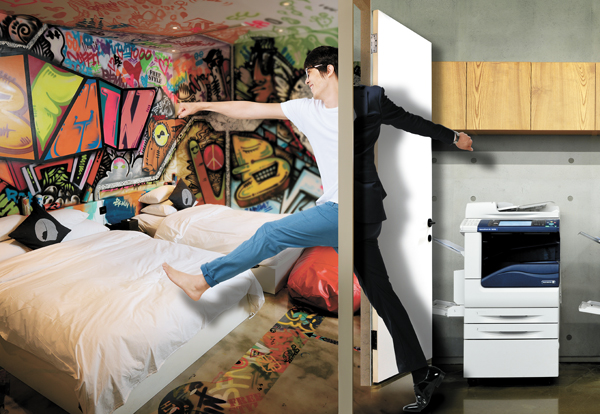 For people too tired to get away during the summer, boutique hotels offer a relaxing alternative. [JoongAng Ilbo]

Rather than deal with the hassle of traveling, how about getting away from it all without going anywhere? For those who are looking to relax and enjoy a vacation at home, there’s a new option in Seoul these days: The boutique hotel.

Five-star hotels are nice enough, but they can often be sterile, cookie-cutter and boring. A good boutique hotel, on the other hand, has personality and flair, enough to make you feel special, even if you’re staying in your own city.

“I’d like to define a boutique hotel as ‘freedom,’?” said Kim Jin-tae, the general manager at InterContinental Seoul Coex.

“For example, all the rooms in an ordinary hotel typically are painted the same colors. The furniture brands and layouts are the same, too. But at a boutique hotel, there is a different design for each room.”

Another characteristic of a boutique hotel is luxuriousness. Instead of mass-produced furniture, most of the furniture and knickknacks are hand-picked for each room.

Korea has a relatively short history with boutique hotels. The first one in Korea was the W Seoul Walkerhill Hotel, which opened in August 2004. Young architects and interior designers from the United States and Hong Kong participated in designing the hotel’s 200 or so rooms, giving them a panache that instantly made the hotel the No.1 hangout for trendsetters.

More recently, the Imperial Palace Hotel opened the IP Boutique Hotel in Itaewon, central Seoul, in 2010. But despite the name and the funky exterior, the rooms here are nearly all the same and this is barely a “boutique” hotel.

About a year later, the furniture company Casamia opened La Casa near the uber-trendy Garosu-gil neighborhood, in Sinsa-dong, southern Seoul. And last year, Hotel the Designers, which proclaims itself to be an “authentic design hotel,” opened in Samseong-dong, southern Seoul.

Prompted by its instant success, Hotel the Designers recently opened a second branch near Hongik University, in Seogyo-dong, western Seoul.

Although boutique hotels are new to Korea, they have been well established in the West for some time now. Small boutique hotels opened one after another in New York and London in the 1980s and they quickly captivated people who were sick and tired of five-star chain hotels.

“Since many European countries try to keep old buildings as they are, this made it possible to create boutique hotels in the beginning,” said Ahn Jae-man, the general manager at Hotel the Designers.

With more Koreans traveling overseas, they have increasingly been exposed to the charm of boutique hotels, increasing the demand for such lodgings at home.

Kim Da-young, the author of “Requirements for Smart Travel,” said that young people, especially women in their 20s and 30s, are major targets of these boutique hotels.

“These people don’t want to spend much time getting out of the city,” said Kim. “For these people, boutique hotels are attractive destinations.”

As boutique hotels have caught on among young people, who are conscious about trends and design, luxurious brands also joined the fray.

Italian fashion house Gianni Versace was one of the first, opening the Palazzo Versace on the Gold Coast of Australia in 2000. Inside the hotel, everything, from the cushions to the coffee mugs to the linens, are products of the fashion house.

Italian jewelry brand Bulgari and fashion brand Giorgio Armani have also waded into the fray, with Bulgari opening a hotel in Bali, Indonesia, in 2004 and Armani opening a hotel of its own in Dubai in 2010.

Boutique hotels are still finding their way in Seoul, but for now, here’s a look at some of the best options in and around town. 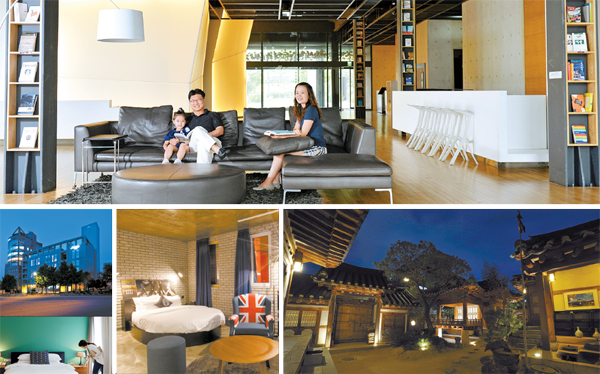 Clockwise from top: Jijihyang, located inside Paju Book City, has a book theme. Guests can enjoy the beauty of the hanok, a Korean traditional house, at Rakkojae. The “Beatles” room at Hotel the Designers. Hotel La Casa is run by local furniture maker Casamia. [JoongAng Ilbo]

Rakkojae, meaning “a house in which you enjoy the past,” is a 130-year-old hanok, or traditional Korean house, located in Bukchon, Jongno, central Seoul, in the middle of the city’s best-known hanok district.

The hanok first opened to the public in 1934, when it was used as a home for an academic society which studied history, language and literature.

Since the hotel is a hanok, all the interiors are traditional - for example, a rusty spoon is used as a door lock and an earthen pot is used as a trash can.

The most popular room here is the room that has a jeongja, or a small pavilion. From the pavilion, you have a great view of the entire hanok.

For family visitors, a separate building, called byeolchae, with two rooms and a private living room space, is recommended.

“It is a place where you can enjoy Bukchon to the fullest,” said Ahn Young-hwan, the owner of Rakkojae.

To help ensure Rakkojae is peaceful and tranquil, children younger than 12 years old are not allowed to spend the night there.

Nestled inside Paju Book City, Gyeonggi, Jijihyang is a boutique hotel with a book theme. Meaning “home for paper,” Jijihyang is decked out with books everywhere, about 5,000 throughout the hotel, with 300 in the lobby alone. While there are plenty of luxurious sofas and other amenities, one thing Jijihyang doesn’t have is television - there are none in the entire building.

Along with ordinary rooms, there are special rooms named after famous Korean authors, including Park Kyung-ni and Park Wan-suh. These special rooms are decorated with pens, original manuscripts and photos of each author.

The hotel is located inside Paju Book City, about 30 kilometers (19 miles) northwest of Seoul, a special development that has won rave reviews for its architecture, book cafes, museums and children’s theaters.

For the design savvy, Hotel the Designers will not disappoint. Fifteen professional designers worked on its rooms and suites, creating a variety of eye-popping concepts and interiors. For example, room No. 1111, “Heart Spray” (featured above in the main picture), is totally covered with graffiti, while room No. 911, “Sweet Bubble Tree,” calms with its decorative wooden sculptures.

Operated by Casamia, a local furniture company, all the rooms are decorated with products of Casamia.

Of six different room types, Casamia Suite, Garden House and Loft House will surely intrigue those who are interested in interior design.

Take Casamia Suite for example, the room is decorated with light oak colored furniture and looks like a cozy but humble living space from Northern Europe, while Loft House is modern and luxurious with dark tones of furniture and velvety couches.

When guests feel like purchasing products, from furniture to props, they are able to visit a store that is connected with the hotel building.