The 10-panel folding screen “Haesanggunseondo,” which was owned by Barbara Michel-Jaegerhuber in Germany, fetched 660 million won (591,360 dollar) at the Seoul Auction late last month. Provided by the Seoul Auction

The loud voice of an auctioneer resonated from an auction hall of the Seoul Auction in Pyeongchang-dong, northern Seoul, late last month as the crowd gazed at an ancient art object, which was the day’s highlight item.

The art object called “Haesanggunseondo” is a 10-panel folding screen of unknown authorship and is presumed to have been produced in the mid-to-late 1800s. The painting that decorates the folding screen is on silk and it features “enlightened immortal beings” or gods, called “shinseon,” engaging in their own activities on the sea.

Despite its age, the screen’s detailed lines, clear colors and well-preserved state seemed to mesmerize the crowd as a masterpiece. According to an official at the Seoul Auction, the painting is similar in style to a painting called “Shinseon,” by renowned painter Kim Hong-do of the Joseon Dynasty, who is better known by his pen name, Danwon (1745-1806).

“Six hundred and sixty million won. Going once, going twice, sold,” yelled the auctioneer as the day’s highlight item was sold for more than twice as much as its presumed value of 300 million won to a Korean collector. The auctioneer banged the gavel to announce the winning bid and finally the art object that’s considered equivalent to a cultural asset will find a new home in its home country.

About a month before the auction, the Seoul Auction received a letter from Germany. Barbara Michel-Jaegerhuber, 91, wrote in the letter that she wanted to put an ancient art piece up for auction that carries historical significance in Korea.

In the letter she writes: “Dear new owner of the Korean folding screen ‘Haesanggunseondo,’ I am sending my wish in this time of the 130th anniversary of the establishment of diplomatic relations between Korea and Germany.

“In the early 20th century, the Emperor Gojong bestowed this folding screen to my grandfather Carl Andreas Wolter and it was handed down to my mother and then to me. I congratulate you, who have become the new owner of this precious artwork that includes a cultural value that can never be repeated.

“My family went through two series of world wars, however, managed to protect this folding screen through four generations and treasured it valuably. This artwork has become an important part of the past 91 years of my life and it has become my biggest hope to see these shinseon in the painting go back to their homeland, Korea, during my lifetime. 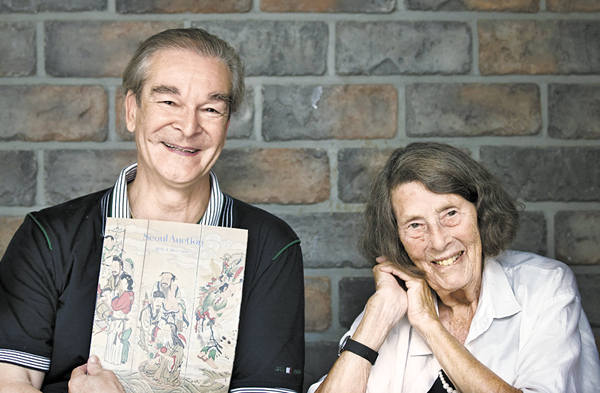 “I still remember my grandfather’s story who lived in Incheon and I also remember many stories my mother told me about him as well. As I send this valuable artwork to its motherland, I hope it finds a home at a special place where it can be close to the public. I think places like museums or art centers in Seoul will be a great place for not only locals but also for visitors to appreciate this great masterpiece.”

The story starts in 1887. Jaegerhuber’s grandfather, Carl Andreas Wolter (1858-1916), was a German businessman who established the first foreign company in Korea.

The headquarters of the trading company was in Jemulpo, Incheon, and the business expanded greatly until 1905, when Korea forfeited its diplomatic rights when the Protectorate Treaty between Korea and Japan concluded.

In 1908, when Wolter was leaving Korea for Germany, Emperor Gojong bestowed the folding screen as a gift. As gunseondo signifies longevity while acting as a lucky omen, it is said that Emperor Gojong wished Wolter’s family to have a safe trip through the seas back home.

While living in Korea for about 20 years, Wolter raised eight children, including twin girls. The younger daughter among the twin girls was Marion Wolter, the one who inherited the “Haesanggunseondo” from her father. She is the mother of Jaegerhuber.

“My mother told me over and over until she passed away in 1964 that this folding screen must be looked after very carefully as it is very precious and it should be sent back to Korea one day,” said Jaegerhuber. She said that she grew up listening to her mother talking about the story behind the “Haesanggunseondo.”

“Now that I’ve ended my mission [of returning it], I feel lighthearted.”

The JoongAng Ilbo sat down with Jaegerhuber, who visited Korea for the first time to witness the moment her family’s treasured art piece finds a new home in its motherland.

Despite her age, Jaegerhuber, who majored in arts and still paints, was full of curiosity. Following the memories of her mother’s words of “Joseon,” Jaegerhuber looked around palaces in Seoul and went around Incheon, where her grandfather had started the business.

Left: The blonde German twins, who are the daughters of Carl Andreas Wolter, were said to be childhood friends with crown prince Sunjong. The girl on the left is Barbara Michel-Jaegerhuber’s mother, who inherited the “Haesanggunseondo” folding screen from her father. Right: Emperor Sunjong, the second son of Emperor Gojong, who later became the second emperor and the last Korean ruler of the Joseon Dynasty. [JoongAng Ilbo]

According to Jaegerhuber, her mother and her twin sister were childhood friends with the crown prince, Sunjong (1874-1926), the second son of Emperor Gojong. Sunjong later became the second emperor and the last Korean ruler of the Joseon Dynasty. Born between emperor Gojong and empress Myeongseong, emperor Sunjong was said to be “weak in health but firm in character and intelligent.”

“According to my mother’s words, when Sunjong was a crown prince, they played together at the palace very often. She said the large and dark palace was a great place to play hide-and-seek. She also said that Sunjong often said while touching my mother and aunt’s hair, ‘This is gold.’ When I visited the Gyeongbok Palace, I saw a line of small stones in one of the yards and thought to myself ‘Ah, that must be it.’ My mother told me that they once got told off playing around and jumping over the stones, but Sunjong told the adults not to tell them off because ‘they are my friends,’” said Jaegerhuber.

These stones refer to poomgyeseok, which are erected in the yard in front of the Geunjeongjeon to indicate the order of the positions of public officials. There are 18 of them, nine in each row. For the twins and the crown prince, it was a perfect playground.

“When I heard the story, the image of the crown prince appeared in my mind as a mature and thoughtful boy to the two foreign girls. I think such pleasant feelings made my mother to think of Joseon as a ‘large country,’” said Jaegerhuber.

During the period when Adolf Hitler was leading Nazi Germany, Jaegerhuber was a young student. One day, she went back home and told her mother about what she had learned during history class: East Asian countries, including Korea, are uncivilized and savage countries. Jaegerhuber said her mother got furious.

“She got all serious and told me that it was a distortion of history. She explained that Korea’s printing culture was more developed than that of Gutenberg’s and gave examples to prove that Korea is a civilized country. When I spoke about this at school the next day, everyone looked at me weird, but I wasn’t ashamed. Maybe it was because of the ‘Haesanggunseondo’ that I had always seen at home,” said Jaegerhuber, adding that she has a special bond with the shinseon in the folding screen.

“Whenever I was in difficult or depressing moments, I conversed with the shinseon inside the folding screen. I prayed to them thinking about my mother. I also talked to them before I brought it to Korea. I said, ‘It must be so exciting for you guys to go back to your country of birth.’ I said my life has been full of happiness because of them and that I will always keep in touch with them and talk to them, even though we are so far apart because we are telepathic with each other. Even if I pass away, my descendants can always visit Korea to see this painting so it’s not an eternal goodbye,” said Jaegerhuber as her eyes welled up.

Like an artist, Jaegerhuber, who majored in painting at the University of Hamburg, said she recorded the trip to Korea in her sketchbook and said she’ll start learning Korean when she returns to Germany.

“I don’t know why I didn’t make this trip earlier. Actually, my mother was really proud of this artwork that the Emperor of Joseon bestowed to her father. An ornamental hairpin that was bestowed together with this folding screen got lost during the Second World War,” said Jaegerhuber.

“Around the 1950s, my mother decided to return this artwork to Korea as she believed that the legacy of the royal family must be kept in its home country, however, it became impossible as the Korean War broke out.”

It was a book written by Hans-Alexander Kneider, 60, a professor of German language and literature at Hankuk University of Foreign Studies, that allowed the “Haesanggunseondo” to make an earlier return. In 2009, he published a book about the life of Carl Andreas Wolter through a German publisher and when Jaegerhuber read the book, she made contact with him and was able to make contact with the Seoul Auction. A Korean translation of Kneider’s book will be published in September.

After concluding a seven-day trip in Korea, Jaegerhuber shed tears and said, “It was like a dream.”

“I wish these shinseon, these gods, who have looked after all my family members so far will look after the Korean people and act as patron saints like they did for us. I also hope the friendship between Korea and Germany maintains for hundreds and thousands more years together with these ‘shinseon’ who have connected us for the past years. Auf Wiedersehen. Goodbye.”