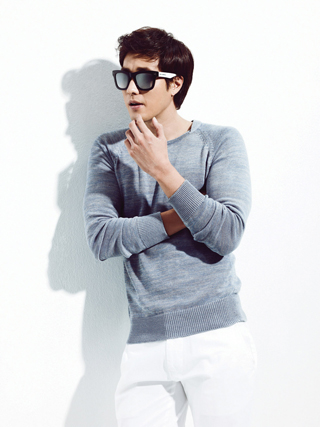 Actor So Ji-sub of the KBS drama “I’m Sorry, I Love You” spoke highly of the acting skills of fellow actress Gong Hyo-jin of the MBC drama “The Greatest Love” at a press conference of new SBS drama “The Master’s Sun,” in which they are starring together.
“Gong is the best out of all the actors and actresses working in romantic comedy in Korea,” said So yesterday in Mok-dong, southwestern Seoul.
“She is so good and I’m amazed at her ability to take the counterpart’s acting well enough.”
Gong also answered that the two are keeping up with each other in a filming set.
“I worried a little bit before because I heard from other acquaintances that So is not so outgoing and does not talk much,” she said. “However, as we began acting together, [I realized] he is a very positive person.”
In the upcoming drama starting on Aug. 7, So will play a character that owns a large fashion mall. Gong will play So’s counterpart who can see ghosts.