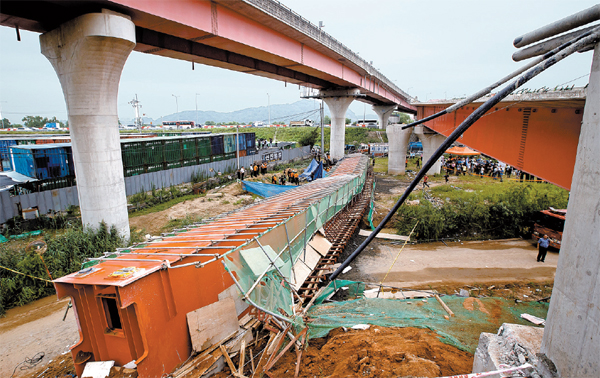 A section of a ramp connecting to the Banghwa Bridge that fell and killed two workers and injured another. Rescue workers rushed to lift the 320-ton ramp to find the bodies of the dead. [NEWS1]

A ramp under construction on the Banghwa Bridge collapsed yesterday, killing two workers and injuring one.

There were no cars on the ramp.

At around 1:04 p.m., a 47-meter (51.4-yard), 320-ton steel ramp connecting the bridge and Banghwa-dong, western Seoul, fell from a 10-meter supporting pillar. It fell onto the construction side beside the bridge.

There were four workers at the site. Three of them were building a wall of the ramp, according to the Seoul city government.

All three workers fell when the ramp collapsed. The fourth worker was unscathed for reasons not immediately known.

“We assume the whole structure tilted on its side and fell,” O Nam-jik, a city government official said at a briefing yesterday. “The exact cause of the accident is under investigation.”

O said the city government had no clue why the ramp fell off its pillar.

One of the two fatalities was working in a kind of forklift while the other fatality and the injured worker were spreading asphalt, according to the city government. The construction managers were having lunch away from the construction site at the time.

All four workers on the site were Chinese nationals. The two fatalities were Choe Chang-hui, the 52-year-old driver of the forklift, and Heo Dong-gil, assumed to be in his 50s. The injured worker was Kim Gyeong-tae, 60.

Rescuers struggled to recover the bodies of the two dead men, which were under the ramp.

“I was sitting on the backseat of the forklift and everything collapsed,” Kim Gyeong-tae told the JoongAng Ilbo. “My two coworkers died immediately and I survived.”

Kim’s jaw was severely ruptured, according to doctors, so he couldn’t communicate properly. Doctors told the JoongAng Ilbo that he should be hospitalized for about 16 weeks.

“I heard the sound of a blast,” Park Cheol-sun, a 70-year-old who lives nearby said. “It was like an explosion of dynamite.”

“I frequently passed the construction site and always felt nervous whenever I saw the ramp, which was unstably placed on the pillar,” Kim Il-seok, a 55-year-old local resident and bridge engineer, told the JoongAng Ilbo. “They should have set up additional pillars to bear the heavy load. It was a predictable accident.”

About 83 percent of the construction was completed, according to Seoul city government.

“I can’t hide my terrible feelings about this accident,” Seoul Mayor Park Won-soon told reporters at the site yesterday. “As there could be people buried at the site, we will do our best to resolve this situation. We still have no clues on the cause of the accident, we will figure it out as fast as we can and do our best to set up solutions.”

Representative Kim Sung-tae from the Saenuri Party also visited the site and told reporters, “The fundamental problem is miscommunication between the Seoul city government and a series of subcontractors and builders.”