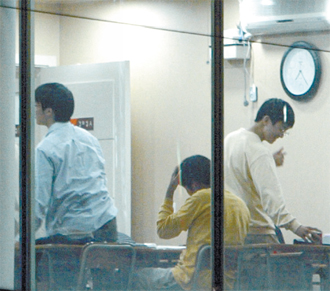 Hagwon, the Korean word for academy, are continuing their classes past the 10 p.m. curfew, despite a government crackdown on after-hours education.[JoongAng Ilbo]

It’s 1 a.m. in the Gangnam District, southern Seoul, and from the inky darkness of a building that houses one private academy, or hagwon, several students are silently sneaking out.

Three minutes have passed since a small group of students went home, and another group of three comes into sight. Walking soundlessly, students are dismissed from classes group by group, at an interval of every three minutes.

“I’m now on my way home after several long hours at the academy,” said a 15-year-old student, who goes to school in Seocho District, southern Seoul. He is currently preparing for an exam to get into a special purpose high school in Seoul.

“Though it’s exhausting to take classes until 1 a.m., because many of my friends are also following the academy’s schedule there’s no other option,” said the tired-looking student, who asked for anonymity.

But, in fact, these late-night classes are illegal.

In the case of Seoul, an ordinance enacted in 2008 by the Seoul Metropolitan Office of Education states that class hours of private educational institutes are only to operate between 5 a.m. and 10 p.m.

The intent of this measure is to protect the students’ rights to rest and sleep and to invigorate public education. Despite this enactment, some institutions are continuing their late classes illegitimately, evading the legislation.

For instance, some teachers carry on with their classes while covering up the windows with black screens so that no light can be seen from outside. They also tactfully send students out one by one after class in order to not arouse suspicion from education officials.

Moving students to private houses or one-room studies for lectures is also a common way to get around the regulation.

Some even move to other provinces where the regulations are looser.

There was a private hagwon caught by education officials taking students from Gangnam District, Seoul all the way to Gyeonggi at 10 p.m. to continue class until 2 a.m.

To evade government oversight, some hagwon even lock the door or install a camera to check for inspectors, making it difficult to detect their crimes. Adding to this, academies even ask for more pay in return for the burden of these risks.

Hagwon managers have their own excuses for teaching young students in this unethical way.

“Programs created for the preparation of various contests and entrance exams [for special-purpose high schools] were not created by us,” said a manager of a private prep school for a special purpose high school in Gangnam District, speaking on condition of anonymity.

The manager said there is demand from parents to run class hours until late at night. “It is the result of strong demand from both parents and students. We should not be the only party to blame.”

On the rampant practice of evading the government curfew, education officials cite the shortage of manpower for effective oversight.

“We are aware of widespread illegal practices by many private institutes like shuttering their windows with black screens,” said an official from the public education team at the Seoul education office.

“There are over 13,000 such hagwon in Seoul and 6,000 of these prep schools are in the Gangnam District, where only three education officials are assigned to oversee the entire number [for the curfew regulation]. Because of a lack of manpower, we can’t examine all institutions, especially ones with the lights out.”

And some parents are not happy with the government control on hagwon management, claiming the authorities are failing to see the reality of this education-crazy country.

“It is inevitable to take more classes [at hagwon], even at night, in order to make up for insufficient class hours at schools,” said a mother of a high school student in her 50s, who asked for her name not to be disclosed.