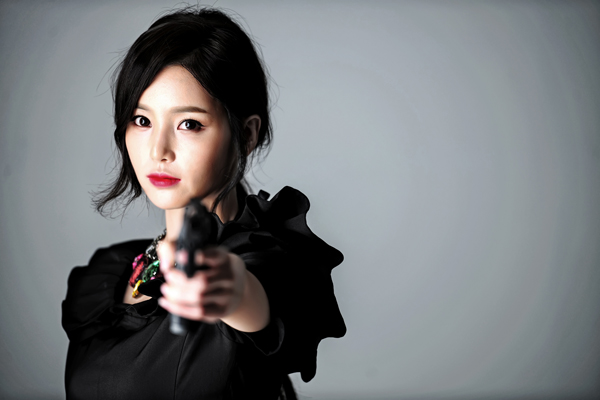 Nam Gyu-ri made a name for herself as a member of the girl group SeeYa in 2006, but she soon left the group and has instead been trying to make it as an actress. Unfortunately, public opinion has been generally negative, especially after her 2008 film “Death Bell.”

But Nam kept at acting, despite the negativity. And now that her latest drama, JTBC’s “Heartless City,” has ended its run, she says that at last she is learning what acting is all about. In “Heartless City,” her character Su-min had long obsessed about taking revenge on a man who wronged her, until she falls in love with him.

“I felt the true taste of acting,” Nam said to Ilgan Sports, an affiliate of the Korea JoongAng Daily.

“The more I focus on acting, the more I find it cathartic.”

Nam says she knows that there is still a lot she needs to learn, but she feels she has come a long way since switching careers.

“If I continue to discipline myself, I think by the time I have 10 years’ experience, I will have learned to cover my mistakes.”

Q. Wasn’t it hard to film your latest drama?

A. I was very energetic even though I wasn’t getting any sleep for a couple of nights. It was exciting getting a chance to show things that I had not shown before. Since my debut, I’ve heard a lot about me looking coy or immature. In the drama, though, my character Su-min experiences all sorts of hardships as soon as she becomes an adult. Although I never went through anything as extreme as she does in the drama, I had my own difficulties. Thanks to that, I could empathize with her.

Do you follow how viewers react to your acting?

This time, I intentionally looked for those reviews. There were many posts saying things like, “Why is she wearing such thick makeup,” or “She tries too hard to look pretty.” After reading such negative responses to my acting and character, I realized that I need to have a strategic and meticulous plan to develop my career as an actress.

You didn’t use a stuntwoman for some of your action scenes. Did you get hurt?

When I was filming getting beaten by inmates in prison, I hit my head really hard on the floor. For a moment, I couldn’t open my left eye and couldn’t move my body. I was thinking “Maybe I could die.” But thankfully, nothing else serious happened to me. Even that beating I found weirdly cathartic - it made me suspect I could be a weirdo.

So how did you change after reading the reviews?

I realized that I need to put more effort into making my character look real, so that when the audience looks at me, they will instantly know, “Oh she’s having a hard time.” So, toward the middle of the filming, I barely put on any makeup. How can my character be healthy when her internal conflicts are reaching a pinnacle? To cover my inherently red lips, I put on a color corrector, and I let my pimples grow without trying to squeeze them.

Do you have plans to return as a singer?

I don’t have a big passion for it. If I were to sing, it would be something like singing on the soundtrack of a work I was participating in. I feel more passionate about acting. I’ll do my best until I’m accepted as an actress.