Artists with messages vie for 2 awards

Artists with messages vie for 2 awards

The works by the four candidates for the Korea Artist Prize 2013; Ham Yang-ah’s video projection “Bird’s Eye View” (2008). Provided by the National Museum of Modern and Contemporary Art

Two ongoing exhibitions are helping art lovers see who is noteworthy among Korean contemporary artists in their late 30s or 40s who are relatively established but continue to broaden their horizons.

One is an exhibition featuring four candidates for the “Korea Artist Prize,” co-sponsored by the National Museum of Modern and Contemporary Art (MMCA) and the SBS Foundation. The other is a show of the three finalists for the “Hermes Foundation Missulsang” award granted by the French luxury brand Hermes.

The artists running for the Korea Artist Prize’s second edition speak about contemporary society and nature in personal and emotional ways and with distinctive visual images. The nominees for the Hermes award’s 14th edition show an anthropological approach to sociopolitical and historic issues with works hovering the border between fine art and documentary.

The works by the four candidates for the Korea Artist Prize 2013; clockwise from left, Jo Haejun’s video “Scenes of Between”(2013), Kong Sung-hun’s oil painting “Gray Hair”(2013) and Shin Meekyoung’s soap sculpture “Translation Venus Project” (2002, restored in 2013). Provided by the National Museum of Modern and Contemporary Art

The works of Kong Sung-hun, Shin Meekyoung, Jo Haejun and Ham Yang-ah are now on display at the MMCA’s headquarters in Gwacheon, south of Seoul.

Kong’s oil and acrylic paintings depicting landscapes in gloomy and ominous moods “reveal nature at its exhausted state after having been endlessly exploited by people,” according to the museum. Still, the tempestuous clouds in the paintings suggest nature’s “enduring power beyond human control,” it said.

Shin shows the elaborate replicas of ancient Greco-Roman sculptures and Chinese antique ceramics that she made with soap. The “Translation” series, which has been invited to many prestigious museums and galleries including Seoul’s Leeum and London’s Saatchi, raise the question, “Are artworks eternal?”

Jo’s project for this exhibition is unconventional as it starts with his curation of his father’s works - drawings that offer glimpses of an ordinary person’s life amidst Korea’s tumultuous modern history. The latter part of the drawing series includes the artist’s own stories to give the link between the father’s and son’s generations, which have many gaps.

Ham shows a series of video works under the title “Nonsense Factory.” Based on a short story written by the artist, the video series is “a mirror in which we can observe our society,” the museum said. 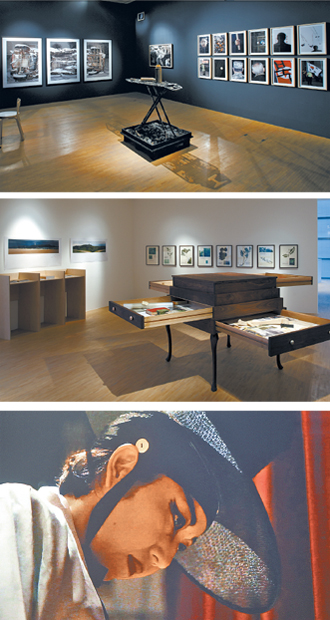 The works by the three finalists for Hermes Foundation Missulsang 2013 are on display now at Atelier Hermes in southern Seoul; (clockwise from top) Noh Suntag’s project “In Search of Lost Thermos Bottles” encompasses photography and the installation of found objects to show how politicians make use of inter-Korean conflicts; Na Hyun’s “The Babel Tower Project,” also including photography and installation, shows both artistic and anthropological approaches to the repetition of history; Jung Eun-young’s video “Act of Affect” questions gender dichotomy by showing an actress playing a male role in Korean all-female musical theater, which boomed in the mid-20th century and declined since then. Provided by Hermes Foundation

The project was inspired by a conservative politician, who became a laughingstock during his 2010 visit to Yeonpyeong Island in the Yellow Sea after it was shelled by North Korea. The politican mistakenly held a blackened thermos bottle and told TV reporters, “This is a shell.”

With the project, encompassing photography and installation of found objects such as burnt thermos bottles that Noh found on Yeonpyeong Island, the artist shows how politicians make use of inter-Korean conflicts.

Na’s “The Babel Tower Project” also deals with sociopolitical and historic issues with photography and the installation of found objects and documents he collected during research.

The artist regards Teufelsberg, an artificial hill in Germany made of rubble after WWII, and Nanji Island in Korea, also made of rubbish, as strange monuments of violence in history and seeks to explore the repetition of history.

Jung, a feminist media artist, presents the video series “Act of Affect.” The videos raise questions about gender dichotomy in our society, showing the old actresses who played male roles in “Gukgeuk,” a Korean all-female musical theater genre, which boomed in the mid-20th century and declined since then. One of the videos shows a rare young successor of gukgeuk performing a male role as a woman.